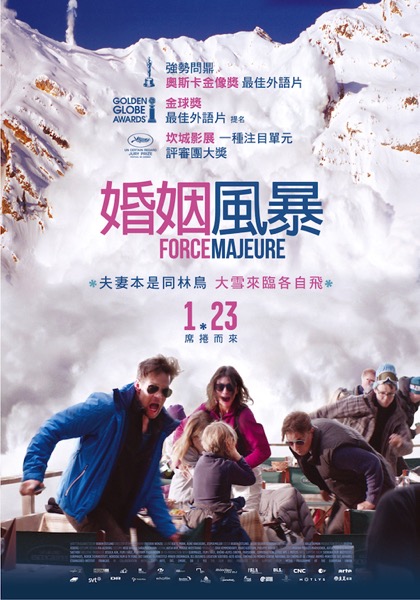 In Swedish writer/director Ruben Östlund’s fourth feature, a nuclear Swedish family takes on a skiing vacation in a luxury resort at the French Alps, Tomas (Kuhnke) and Ebba (Kongsli) with their two kids Harry and Vera, however as the title suggests, Tomas’ one instinct reaction during a “force majeure” – an avalanche which turns out to be a false alarm, and his further denial triggers the marital dissonance between them, and eventually puts their marriage through an unanticipated test.

Formulaically divided into five skiing days chained together with an ironic recurrent music motif of Vivaldi’s Summer Concerto and stunning scenic shots, the film doesn’t take an overt stand on the viewpoint of Ebba (with whom viewers tend to concur firstly) or Tomas (whose cowardly behaviour under an unforeseen survival mode should not simply be equated with the incompetence of fatherhood), instead, it takes turns to scrutinise how this incident takes its toll in their deteriorating relationship.

We initially are prone to take the side Ebba, a woman suddenly realises that her husband and the father of her two young children doesn’t live up her expectation of an ideal husband/father. And she is a woman seriously wanting security, this discovery shatters her entire perspective of their life together, instead of communicating in private with Tomas, she chooses to bluntly question him during a dinner with the presence two fellow tourists they barely know, which imaginably elicits Tomas’ defence system to save his face as the patriarch of the family, he affirmatively denies Ebba’s recount of the situation, yet we spectators know he is lying, but both should share the blame on this misstep.

Subsequently, Ebba spends one alone-day to clear off her mind, and later that day they are joined by a friend Mats (Hivju), a divorcé with his twenty-year-old new girlfriend Fanni (Metelius), during dinner, Ebba put forward the incident again and this time, she wants an answer from Tomas (but a further question is what does she really want by pushing Tomas to his limit and forcing him to admit his inappropriate action? Is that really helpful to their marriage?), anyway, under the visual evidence (a video clip taken on his phone), Tomas has to concede with Ebba’s version of the happening. Here Östlund also deploys a parallel argument between Mats and Fanni’s, about a man’s loyalty to his family, the same old male chauvinism theory, the movie could be neater without this digression.

Then it is time to squeeze thoughts from Tomas’ taciturn mind, after a dudes’ day with Mats, during when another small matter furthermore hurts Tomas’ fragile dignity. An all-out cry-fest explodes as we become a bit weary about the issue, Tomas finally collapses in front of his family, emphasises that Ebba is not the only victim in this case, he hates the coward version of him – who sneaks out in such humiliating manner – as well, it seems so that Ebba finally gets what she wants, so is everything fine now? Östlund mischievously arranges another suspenseful event when two kids are left alone, waiting for their father to rescue their mother, inside a thick fog in the snow, which has a tacit cue for a staged act to restore Tomas’ father image in front of his kids. So up till now, everything has circled back to normal when their vacation comes to a finish.

So the family is alright, but how to end the film itself? Östlund needs a sledgehammer innovation to lift up the fuss about something actually quite trivial, thus, he seeks inspiration from a youtube video, concocts a semi-feelgood semi-sardonic final act, which doesn’t indicate any essential connection to the core happening, and a whiff of misogyny is detected. Interestingly FORCE MAJEURE has its likeness with GONE GIRL (2014) to expose the coherent difference between a man and a woman trapped in a marriage, but its central story could be more appropriate transcribed to a short film, and for a 2-hour feature-length, the plaudits it has received since its debut in Cannes last year is overpraised in my humble opinion, and the two leads Kuhnke and Kongsli deserves more recognition than Östlund’s ceremonious orchestration of a slight spousal parable, plus nothing is more annoying than screaming kids. 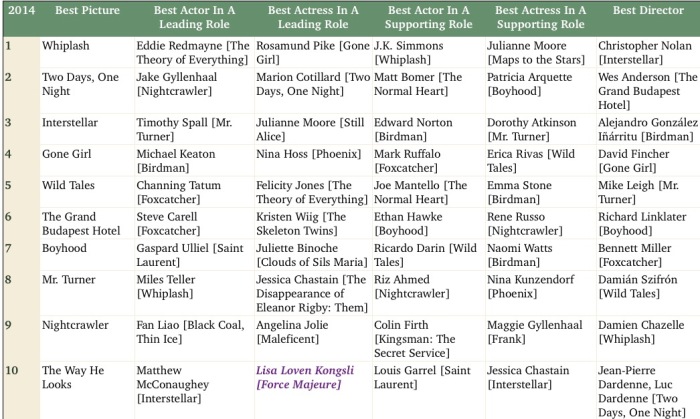