Last year’s universally-acclaimed art house sensation from Russian director Andrey Zvyagintsev, my second entry after his masterful debut THE RETURN (2003) over a decade ago, it has been the hot-shot in the foreign language film category of the past Oscar season since it was honoured with BEST SCREENPLAY in Cannes last year for Andrey and his co-writer Oleg Negin.
One hype of the film is the story is a modern-day refurbishment of the Book of Job in the Bible, although personally being an agnostic and never read the Good Book, I couldn’t care less about it, still the film imprints its pungent indictment of the Russian orthodox church along with condemnations of other societal injustices on the trajectory of an ordinary family’s tragedy.
Opening the film with awe-inspiring shots of stately overwhelming topography of the rural region, Zvyagintsev has already perfected himself as a maestro of cinematic composition after all these years, and the story initially pans out like a heartening litigation between an upright family man Kolya (Serebryakov) vs. the corrupted major Vadim (Madyanov) who wants to underhandedly seize his land and evict his family for his own purpose, since Kolya gets the aide from his longtime friend Dmitriy (Vdovichenkov), a savvy lawyer from Moscow to mediate the lawsuit, and Vadim’s irrational drunk fit timely proffers them a precious bargaining chip may turn the tables. This is the direction what the film seems to proceed on, we see Kolya and Dimitriy encounter unfair treatment by the red tapes and bureaucracy, but they overcome it, or more precisely, Dmitriy overcomes it with his professional aplomb. But then the family crisis slowly takes the main stage, Lilya (Lyadova), Kolya’s second wife, who is under constant discord with Roma (Pokhodaev), Kolya’s teenage son from his deceased first wife, gets frustrated by their murky future, Kolya’s irascible temper and addiction to alcohol. Soon the family begins to deteriorate with an extramarital affair and its ensuing physical assault, until a bleak suicide, which is exploited as a nail in the coffin for Kolya and the house he is firmly defending.
So, we don’t get a happy ending as we expected, instead, the film and its cogent script comb through the harsh situations with unyielding formality, Zvyagintsev carefully leaves all the centre drama off-camera, the affair, assault and suicide, are never directly witnessed by us, thus he sagely provides audience enough time to reflect on the happenings and maintain a close bond with the tale of woe, he knows how to tell a story in the cinematic language. Performances are strong for the four main characters, Lyadova superbly interprets a woman’s implosion with disaffection and despair, not indulging in making a scene, but poignantly draws out audience’s profound sympathy for her. Madyanov represents an opposite excellence in performance, his scumbag mayer is anything but subtle, a full-blooded embodiment of all the vice when a scoundrel ascends to power, incisively, under the aegis of the sanctimonious church. Vdovichenkov’s Dmitriy is the deciding factor is the game, he starts as the one we are rooting for, an avatar of justice, eventually he turns out to be the most ambivalent character and exits the show midway before any further connection; Serebryakov, more readable with his rough edges, is brilliant to watch, portrays a pawn seething with anger but not smart enough to do anything effective, gradually succumbs to his unjust fate just because he is inconveniently in the way of an evil force overriding everything.
By any standards, LEVIATHAN is a film as formidable as its name implies, but it is not a film one can stomach easily since we are not getting used to see evil gets away with it in a fictional platform, one must give credits for Zvyagintsev’s determination to appall and shock apart from his rigid but expressionistic methodology, finally a big plus to Philip Glass’ majestic soundtrack, sterlingly honing its central theme in an otherwise overlong 141-minute length. 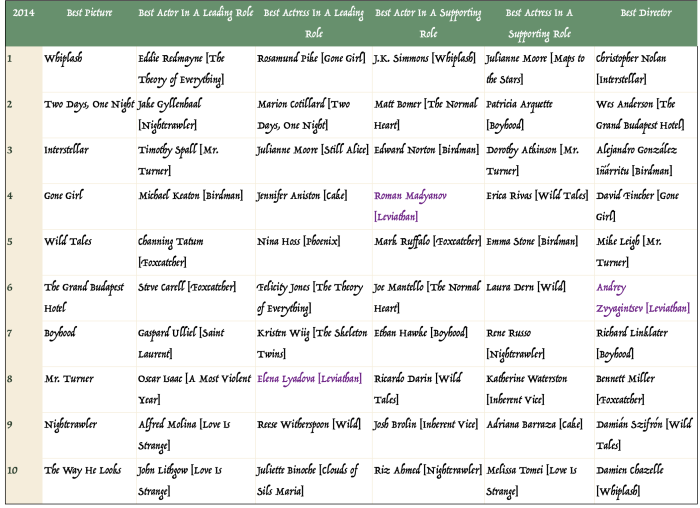