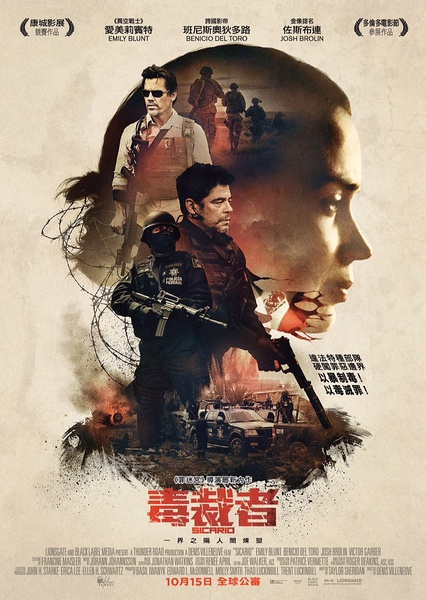 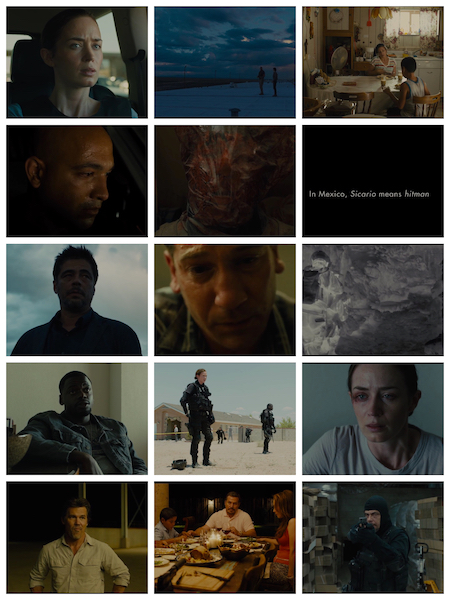 The premise of Denis Villeneuve’s latest picture SICARIO sounds like a top-form police procedural, a CIA elite squad vs. a Mexican drug cartel, Emily Blunt plays Kate, acts a surrogate for audience, who is an FBI SWAT agent, wide-eyed but enterprising in her field of work, volunteers to join the special division, lead by Matt Graver (Brolin), to track down the big boss behind the cartel in Mexico. But as the film explains in its first scene, SICARIO means hit-man in Spanish, so who is this hit-man? This is a vital question.

We faithfully empathizes Kate’s perplexity as the mission goes on, where she begins to question the unorthodox method of Matt and Alejandro (del Toro), Matt’s partner, and is constantly aggravated by being kept in the dark about their black ops. But the whole process will eventually evolve into a shock treatment for her idealistic faith, what behind the whole plan is beyond her widest imagination and comprehension, after being nearly strangled to death, shot by her own people and hectored to sign her signature to approve something sheer against her principle, until her final scene, a silent capitulation aptly and resoundingly strikes the bull’s-eye, a tough lesson about the unapologetic nihilism of our present society, which very likely is also the inconvenient truth. Emily Blunt pluckily takes up the gauntlet to challenge the glass ceiling, materializes as a tower of strength in this men’s business, a tragic heroine, solemnly stomachs a nasty reality check.

Josh Brolin plays in his comfort zone with his craftiness and insolence, whose opportunistic characteristic positions Matt’s seemingly-righteous métier in a grey zone. But the film’s MVP title unequivocally belongs to del Toro’s Alejandro, stuns with his all-out reserved gravitas and a steely resolution for retribution, gradually reveals his true colors as a cut-throat angel-of-death and a proficient marksman in the third act (he is the said hit-man we are looking for), leads towards a series breathless encounters with the wrongdoers of the drug ring and an ultimate face-to-face with Kate, he is the most chilling character on screen after Javier Bardem in NO COUNTRY FOR OLD MEN (2007), if ever the movie will collect any Oscar love in the acting branch, he is the most entitled one.

After his Hollywood one-two punch PRISONERS (2013) and ENEMY (2013), Villeneuve’s directorial finesse again being appraised here, and he is such a first-rate ambience deviser, together with the assistance of Jóhann Jóhannsson’s stirring score, the thumping drumbeat in the opening is so palpable to set the mood upon that right vibe, yet, Villenueve knows the boundary, he doesn’t overly resort to shock value to keep audience on the edge of the seat, which is brilliantly testified by the opening gambit with exchanges of fire, sudden explosion and ghastly cadavers. In a much wiser strategy, he makes good use of DP Deakins’ majestic camerawork to varnish the film with a sublime tinge of poise and magnificence, like the breathtaking aerial shots, striking environmental palettes or the novel usages of thermal vision and night vision frames, they are where cinema finds its most glorious and enthralling achievement, a big bravo to Villeneuve and his crew, soon he will become a juggernaut in the Hollywood industry, and his next project on the slate is the long-waited sequel of BLADE RUNNER (1982), since it might actually be the rare kind that does not sully its predecessor’s reputation, shall we all drink to that?