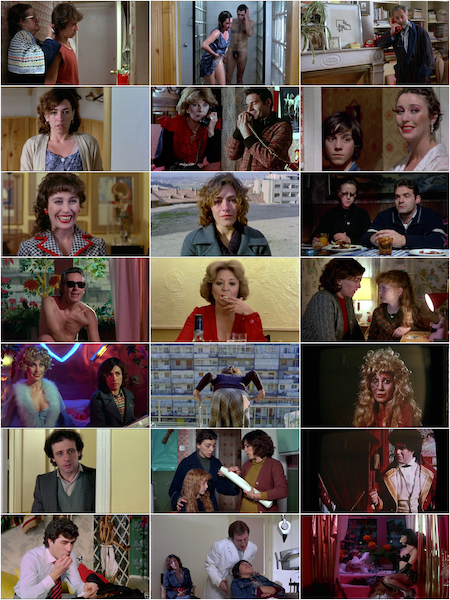 Almodóvar’s fourth feature, blatantly shows a full-frontal man in the opening sex scene, its shock value aptly sets the harbinger of what viewers are expected to see: a hodgepodge of flawed characters.

Among them are a home-working prostitute and her clients, one of which is an exhibitionist and another one is a struggling writer, with a kleptomaniac wife and an alcoholic shrink brother, a suicidal over-the-hill German singer, a telepathic kid and her disgruntled single mother, an impotent cop, a stingy mother-in-law, an abusive husband who is good at forging signatures, a teenage drug-dealer and an his even younger gay gigolo brother and a lizard named Money. Those are the rank and file surrounding our protagonist Gloria (Maura), an ordinary housewife who moonlights as a cleaning lady, living in a minute apartment with her husband Antonio (López), a taxi driver, her mother-in-law Abuela (Lampreave) and two sons in Madrid.

A life of toil, Gloria gets neither love nor money from Antonio, who is possessed with a former German singer Ingrid (Loritz) in Berlin, for whom he worked as a chauffeur; her two sons have already gone awry in their life paths, Almodóvar really stretches out on a limb to let a mother give up her teenage son to the adoption of a lecherous dentist (nudge nudge); her only friend is the fille de joie neighbour Cristal (Forqué), from whom her horizon of sex perversion has been widely broadened. Yet, this friendship is prohibited from Antonio, whose double-standard is the epitome of male chauvinism, which is often the target in Almodóvar’s works, and the marital dispute will heat up to a murder on the spur of the moment, however, things seem to be back on track for Gloria afterwards.

Almodóvar’s gaudy aesthetics has already gone full-blown in this creative dark comedy, and his script goes to great length to make the story whole, although this time even himself cannot make ends meet in this slightly meandering menagerie of wackos.

His sympathy towards women is unmistakably tangible, and Carmen Maura is the perfect emblem of a woman who seethes with a cocktail of negative emotions: disaffection, irritation, frustration, depression and sorrow, but at the same time, represents strength, mettle and hope as if nothing can destroy her whatsoever. Verónica Forqué is a hoot to watch with her gum-exhibiting naivety as the golden-hearted working girl, and Chus Lampreave is always a go-to focus of attention in Almodóvar’s universe. Whimsical and audacious, Almodóvar’s fourth film is a terrific mess and to a great extent, shows his true grit in grain as a young and gifted filmmaker.