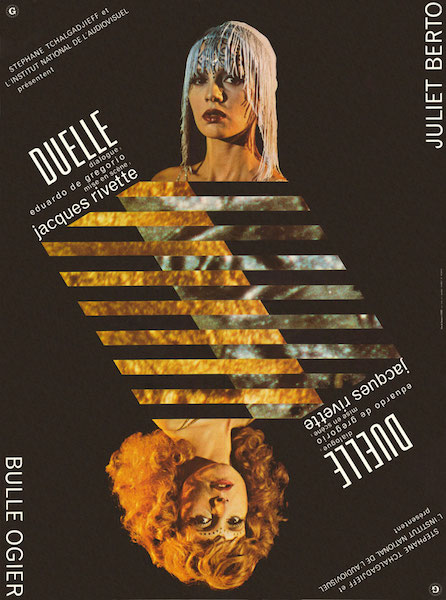 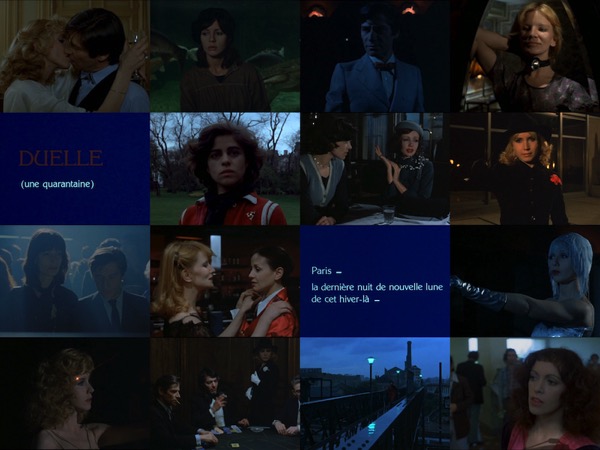 In memory of the passing of Nouveau Vague spearhead Jacques Rivette (1928-2016), let’s delve into WOMEN DUELLING, the follow-up of his pièce-de-résistance, CELINE AND JULIE GO BOATING (1974).

The story is a convoluted mythopoeia, in modern-day Paris, with a close-knit cast of 7 (where two of them will exit the narrative earlier), it cobbles together a fantasy about two goddesses, Leni (Berto), the daughter of the moon and Viva (Ogier), the daughter of the sun, each year they only have 40 (une quarantaine) days to stay on earth. So in order to be endowed the power to remain here, both are seeking for a magic diamond, which is in the possession of a mysterious man Pierrot (Babilée, an agile dancer ), meanwhile his younger sister Lucie (Karagheuz) and his “ticket girl” Elsa (Garcia), who works in a dance club, are also drawn into the manipulative game instigated by Leni and Viva.

Shot with a subdued palette, the picture refuses to grant easy access towards the motivations of its characters at the beginning, audience can only patch pieces of information together after an occult face/off between Leni and Viva in the middle point, then the plot device becomes clear, it seems an ultimate duel between them is inevitably scheduled for the climax, but Rivette mischievously rebuffs a supernatural bravura, and outsources the task to a human being to banish both goddesses out of our universe.

As a fantasy piece, Rivette barely avails himself of special effect to sate viewers’ triggered expectation, and utilizes the more practical sleight of hand (editing, lightning and sound effect) to create the supernatural elements in the film. And there is a ubiquitous pianist (played by Jean Wiener) chaperones the narrative with his improvised music to condense a sublime sensation of mystics and metaphysics, conveyed through the overtly hollow and stilted dialogues.

In the main, WOMEN DUELLING is off-kilter, tongue-in-cheek and chicly inviting, a telling testimony that Rivette’s cinematic wonderland is sheer one-of-a-kind, and challenges our accepted viewing habits up to the hilt! 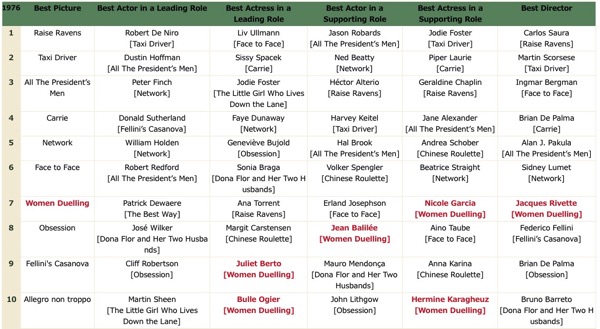