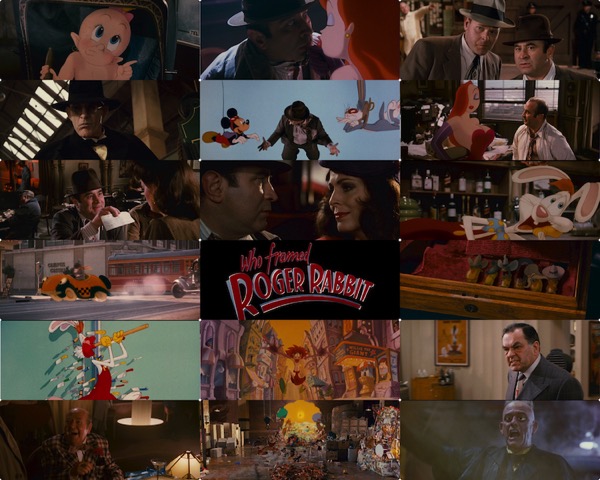 Robert Zemeckis’ fifth feature movie at the heel of the phenomenal BACK TO THE FUTURE (1985), WHO FRAMED RABBIT ROGER is an enormously entertaining amalgamation of live-action and traditional 2D animation, unprecedentedly assembles a plethora of cartoon characters from both Disney and Warner Bros. stocks. A none-too-mind-boggling whodunit in 1940s Hollywood where human society co-exists with a toon world.

Rabbit Roger (voiced by Fleischer) is a name toon star who is framed for the murder of Marvin Acme (Kaye, in his silver-screen swan song), the mogul of Acme Corporation, and a human private eye Eddie Valiant (Hoskins), whose past tragic brush with the toon world still rankles, is dragged into the scramble to shake thing up, scupper a deleterious scheme of the evil Judge Doom’s (Lloyd), settle the old score and finally he and Rabbit Roger establish a mutually respected bond between humans and toons.

Decades later, the picture still looks pristinely stunning, a seamless coalescence of the 3-dimensional real world with the 2-D fantasy inspires great immediacy and fun, in both scenarios where Eddie is thrown into the toon-land or the other way around, toons wandering in the Hollywood lot or engaging a car-chasing in the street of L.A.. A petulant Hoskins is quite gung-ho in acting in front of a green-screen, and Lloyd is a palatable villain with cardboard identity and a cunning plan which is too prescient to be sardonic. A shrewd revelation of the villain is the victims’ very own kind, would spawn different reactions from various projects, on the negative side, Frank Oz’s god-awful THE STEPFORD WIFE (2004) brings to mind, but here, it can easily bypass any unwarranted hard feelings as who gives a fig about what a fruitcake toon thinks.

The main cartoon characters are tailor-made to defer to the lowest common denominator – a kid’s talkie, Rabbit Roger comes off as irritably garrulous, and his pleading of “toons are made to bring laughter” rings hollow since it fails to connect with today’s reality, as we have been constantly assured and re-assured that animated works can do a whole lot more than cheap pratfalls and belabored jokes; the overtly risqué image of his wife Jessica (voiced by an uncredited Kathleen Turner) shows the industry really doesn’t mind pigeonholing female characters into wishful-thinking love interests with inherent crassness, which is also confirmed by the one-note girlfriend role from Joanna Cassidy.

On a larger scale, the movie’s overwhelming success has at least partially sparkled a rekindled mass appreciation of the studio animation, which in the decades to come, has been prevailing over the global market henceforth, a throwaway question mark arises, nevertheless, how come a sure-fire sequel has yet to be green-lit regarding that the innovation in the animation department has already gone through a sea change, certainly, its appeal would exceed those live action performance-capturing ventures Zemeckis has consistently but unfruitfully experimented thrice in THE POLAR EXPRESS (2004), BEOWULF (2007) and A CHRISTMAS CAROL (2009).