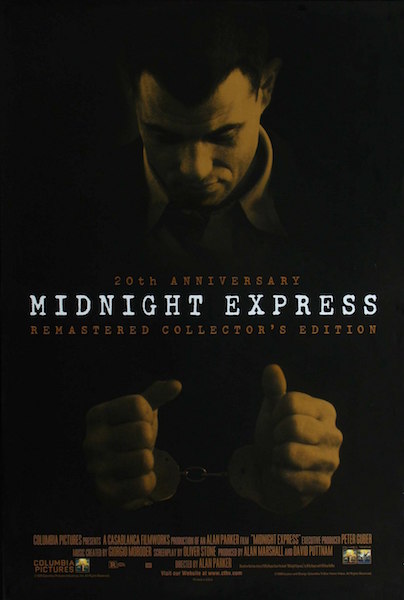 Speciously based on Bill Hayes’ personal experience in the Turkish prison (from his nonfiction book of the same title), MIDNIGHT EXPRESS is a sensationalized account of the searing injustice in Turkish penal system, subjected to Hayes (a heart-throbbing Davis), an American college student, who is arrested in Istanbul on October 6, 1970, for attempting to smuggle 2 kg of hashish out of Turkey. By saying “sensationalized” is not an over-statement, since various sources (including Parker and Stone) have admitted that fabricated characterization was excessively adopted to spice up the story (to a point of evoking a soupçon of orientalism and American chauvinism), and Hayes himself also confirms that the movie’s depiction is a far cry from what really happened (including the gay overtone, which is allowed with a very contained but tender glimpse before being officially nipped in the bud). So, at then, in spite of its huge success in the West, the film was severely censured for its vilification and racist misrepresentation of Turkish people, which was bound to hurt its reputation, because, if one can turn a blind eye on its politically incorrect spin, say, the story is purely fictitious, then the film per se can be more unbiasedly viewed as a pulsating prison drama par excellence, an arousing polemic against inhuman treatment and conditions in the prison, plus a sometimes torture-porn, anchored by an arresting impersonation from Brad Davis.

Bill is caught red-handedly for his own air-headed action, after another harebrained decision to take flight when he sees fit, he knows he must swallow the bitter pills to serve jail time, at first, it is 4 years which he considers fair and learns to lie low under the high-handed atrocity of chief guard Hamidou (Smith, a towering symbol of sadistic monstrosity) until when there is only 53 days left, his sentence is wantonly overturned by Turkish High Court (to set an example also in the wake of the strained and delicate relation between Turkey and USA then), and this time, it adds up to 30 years, a demoralized Bill harangues the court by calling out “all Turks are pigs”, his diction is racist and radical, but it is such a deafening manifesto emitting from the unfairly abused, one simply cannot deny it is self-righteously touching.

Days behind the bars (in a distinctly reconstructed Sagmalcilar Prison, filmed in Malta) become unbearable for Bill and his fellow Western inmates, Jimmy Booth (Quaid), an American petty pilferer, and the British heroin addict Max (Hurt), they decide to carry out the so-called “midnight express”, a prison slang for escape attempt, but the plan is prematurely scuppered by Rifki (Bonacelli), a shifty Turk squealer, the ensuing ruckus sends both Bill and Max in the ward for the insane, a true purgatory where one subsumes himself into a walking dead among others, it mise-en-scène startlingly reveals the sub-human circumstances of the habitat, silently deplores the barbarism enacted behinds those closed doors.

The unexpected visit of Bill’s American girlfriend Susan (Irene Miracle, what a great name!) becomes the game-changer, it revitalizes Bill’s will to escape the living hell (with a little help from Susan’s bared bust too), thanks to a coup de théâtre (again, not what happened in reality), Bill manages to get his revenge and also walk out of the prison, eventually reunites with his family in USA, over a stretch of 5 years from being arrest in the airport.

Parker effectively deploys the auditory aid of Bill’s heartbeats in both the opening sequences where he has to face the airport checkup and the final step of his escape exploit, to retain a structural coordination, whereas in the bulk of the interior scenes, the interplay among actors has been mapped out with attentive closeness and Moroder’s score is eerily apposite to synchronize with the atmosphere runs the gamut from scathing, indignant to compassionate and enthralling.

Brad Davis is snubbed for at least an Oscar nomination for his fearless screen debut, during the segment where he tussles with Rifki, his explosive impulsion simmered with raw rage and resentment is simply transfixing, yet he can also be divinely empathetic in his invective without sounding tub-thumping. Indeed, there is no question why Fassbinder wanted to cast him in his swan-song QUERELLE (1982), he is a walking hot rod, yet, both would untimely exit the world due to drug abuse.

An infirm John Hurt receives his first Oscar nomination for his Method embodiment of a sympathetic character slowly rotten in the corner of the madhouse, it is an impressive feat and well-deserving the laurels, a typically unobtrusive supporting turn without over-egging the pudding.

Fairly enough, MIDNIGHT EXPRESS is a tremendously engrossing film, overtly, takes its poetic license too broadly in a way only eclipses its own cinematic achievement and powerhouse performances, if you are not a Turk, I do recommend you to give it a try.