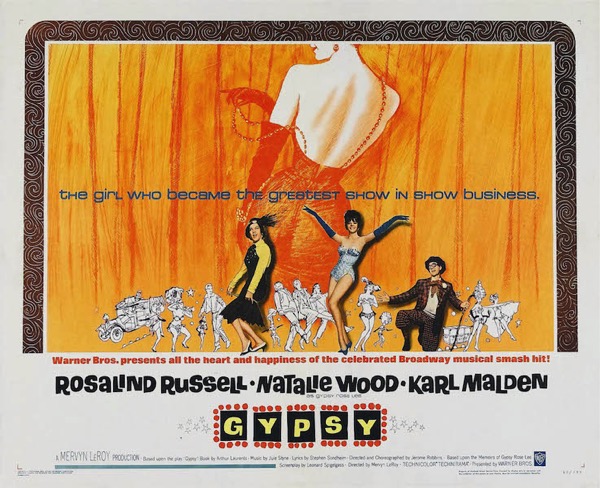 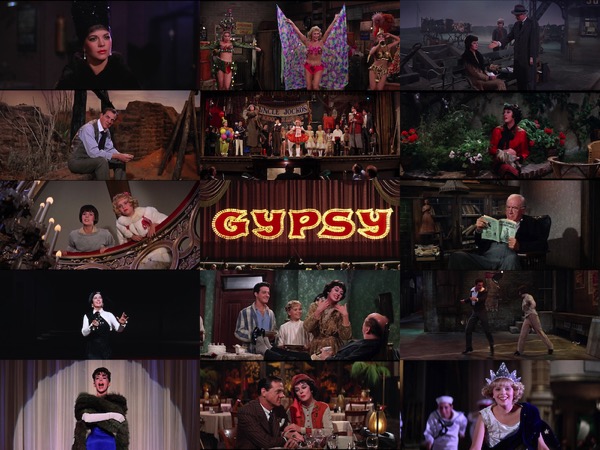 Mervyn LeRoy’s soundstage-bound musical is a biographical treatment of the American burlesque artiste Gypsy Rose Lee, neé Louise Hovick (Wood), yet unconventionally, the film puts Gypsy’s mother Rose Hovick (Russell) to the forefront prevalently, an egoistic thrice-married single mother in the 1920s, who is spoiling for making her younger daughter June (Brittany and later Jilian) a vaudeville star, with the help of the stage agent Herbie Sommers (Malden, why on earth a benevolent gentleman is always afflicted with an ulcer?), who also offers to tie the knot with Rose when her dream comes true, if only he could foretell how long it would take.

Yes, eventually, mama Rose’s dream will come true, but not quite as she has expected. Getting sick of being typecast as a singing-and-dancing baby, June will ditch their itinerant group by eloping at the age of 13. But Rose is undeterred and given no other alternative, she nurtures her less talented (sole by vaudeville star criterion) elder daughter Louise as the new headliner, what would she know, eventually, Louise sinks her teeth in the less glamorous burlesque stage and makes her mark there, notoriously for her forte of stripping, but mama Rose is bereft by everyone else during Gypsy’s ascending to fame, where will she be in the end of the day? In Rose’s touching closing number ROSE’S TURN, she bells out her ambitions and grounds behind her obstinate pursuit in a quite candid register, states that the primacy is not for her daughters’ sake, but herself, when her own vaudeville dream has been dashed by grim reality, all she could do is to invest and inculcate her dream into her daughters’, often too blind to see clearly whether it is what the girls’ want or not, one might call it self-serving, but the film doesn’t paper over it with mawkish hokum, that’s the spirit pertains to the epochal ethos, however tactless and outmoded, it is an astute take on the character psych in spite of the picture’s fluffy genre default.

Rosalind Russell’s gravelly voice is predominantly dubbed in her singing part, but it is her obstreperous élan that brings down the house, ever so unapologetically brash and brassy, her mama Rose is a woman rebuffs to bow to the vicissitude of fate, even if it means that she would lose the man she loves, it is incredibly rewarding to watch a middle-age woman goes all out without recourse to the opposite sex for help or comfort, especially under that sexist era, which instantly endows the flick with a more time-defiant quality compared to the lion’s share of studio-backed Hollywood musical epics.

After her gallant act in the Oscar BEST PICTURE winning musical WEST SIDE STORY (1961), Natalie Wood parlays the success into another star vehicle and fortunately, her singing is not dubbed this time, although Russell’s gushing versatility is dauntingly all over the place and Ms. Wood seems to be still hemmed in her teen-idol shell, but as the titular Gypsy, she belatedly secures her own footing in the culminating showdown with Mama Rose, a child finally realises what she wants to be, and trades on what she excels to steer the course of her own life.

GYPSY is a sanitized entertaining commodity of Hollywood musical in its core, slightly drawn-out in its length, vaudeville’s waning appeal might leave the acts and tunes look and sound mediocre and beyond our times, until the burlesque spectacle arrives, nudge nudge (wink wink), but its rare flair as a female-centred razzmatazz surely instils a distinctive charm to LeRoy’s nimble and patient execution, plus, who can ever forget that iconic show-stopping piece YOU GOTTA HAVE A GIMMICK by three unabashed strippers Tessie Tura (Bruce, in gossamer flirtation), Mazeppa (Dane, with her horn and that throaty voice!) and Electra (Arlen, overshadowed by her lighting bulbs garment)? 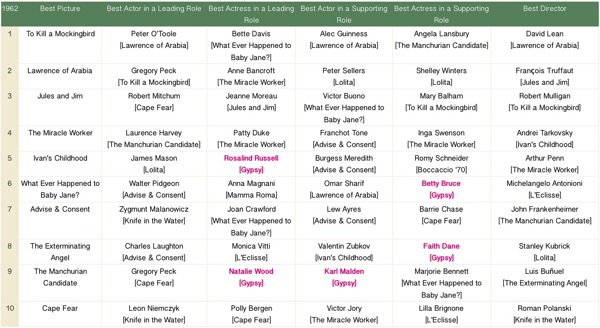