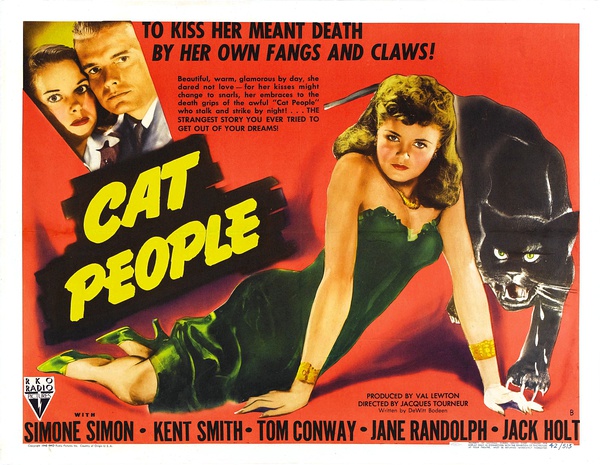 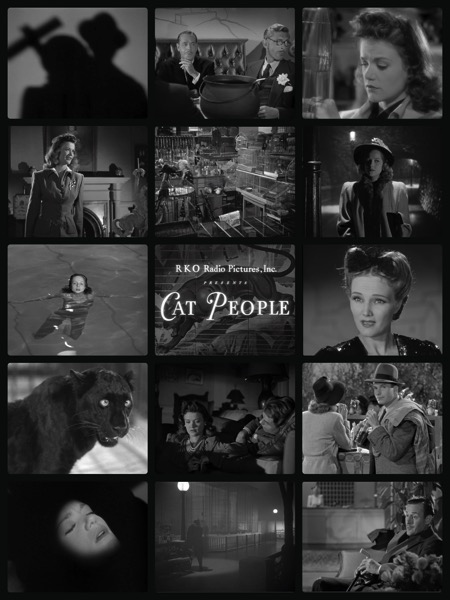 Shot on a shoestring budget, Jacques Tourneur’s CAT PEOPLE is an early specimen epitomizes the “less is more” suspense in the horror genre. Irene Dubrovna (Simon), a Serbian immigrant now working as a sketch designer in NYC, meets cute with a marine engineer Oliver Reed (Smith). But Irene is bedeviled by the urban legend of her provenance that she is a descendant of cat people, will turn into ferocious feline critter when she is sexually aroused, or as the story goes, gets overcome by jealousy or anger.

Oliver isn’t deterred by the obstacle, although he barely believes it, they tie the knot and Oliver promises he will give all the time she wants before they consummate their marriage, also introduces her to the psychiatrist Dr. Judd (Conway) when she voluntarily seeks resource to professional help. But, Oliver is not as perfect as he believes, an exemplar of America’s good old boy, he literally admits he has never been “unhappy” before until this marriage is becalmed without any (sexual) progress and his promise turns paper-thin, when his colleague-and-best-friend Alice Moore (Randolph) blows the lid of her affection, why on earth she has been curbing her feelings for so long? A clunky plot device to instigate the downturn of Oliver and Irene’s platonic marriage.

Tourneur and screenwriter DeWitt Bodeen cunningly scheme suspenseful set pieces thence, ostensibly, Alice becomes the third wheel and must be disposed of, the subsequent two occurrences are the film’s money shots, one would eventually coin the term “Lewton Bus”, which signifies the situation where heightened tension is evaporated by a rather unexpected happenstance; another occurs in a natatorium, which seems Alice is doomed in the flurry of frenzied editing and striking images, in neither case, there is no clear sight of the human-turned-creature, but we are on the edge of our seats.

So after Alice survives both murderous attempts, it dawns to audience that her character is not going to be a supposed casualty because now she represents the right woman for a honest-to-goodness Oliver, it is Irene, a continent immigrant who is wide-eyed enough to be inveigled into a false promise of American dream, must take her bow now, all because she is not willing to put out, her exotic charm fades, her mythic belief becomes threats, and after finally she prances on an imbecile who has too much self-regard to contain, the film ends in a slipshod scramble, the film’s running time clocks in a mere 73 minutes, and finally, we are allowed with several glimpses of the assailing panther (along with some animation and great play of shades), money well spent!

French actress Simone Simon leavens her iconic role with wondrous glamour and fondness in addition to her very feline features, while the rest of the movie’s meagre cast is borderline on autopilot. By today’s yardstick, CAT PEOPLE is a far cry from a horror on its scale of scariness, but as a forebear of the genre, at the very least, it inculcates how to make good use of the ilk’s often limited resource to set up the atmospheric ballast, that’s a merit cannot be gainsaid.