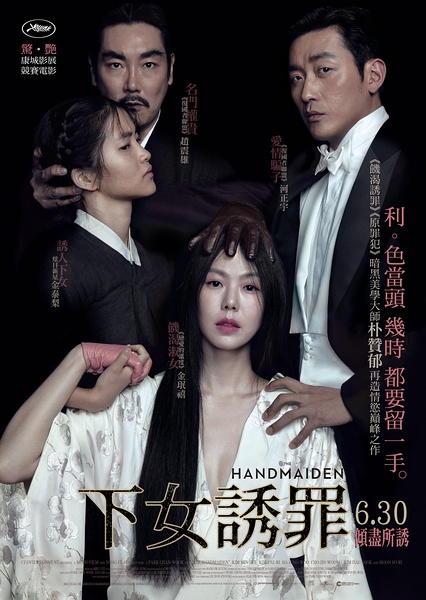 Park Chan-wook’s succulent period drama is a three-act intrigue set in a Japanese-occupied Korea, a close-knit cast includes a Japanese heiress Lady Hideko (Kim Min-hee), her newly hired handmaiden Sook-hee (Kim Tae-ri, in her blazing film debut), the professed Count Fujiwara (Ha Jung-woo), a Korean con artist who is wooing Hideko but schemes to wrest for the marriage’s collateral financial gain, and Hideko’s current guardian, her uncle Kouzuki (Jo Jin-woong), a Korean book collector who is spoiling for a Japanese identity, and has no qualm of marrying his niece as long as he could keep a tight rein on the latter’s magnanimous inheritance.

The narrative is succinctly coordinated among the central quartet and starts from Act I, we peer into the game plan from the angle of Sook-hee, she is not a dewy-eyed lamb as the first impression suggests, but an orphan pickpocket equipped with street smart and a yen for wealth (her con artist mother died during parturition), colluded with Fujiwara, she is arranged near Lady Hideko to sweet-talk her into the marriage, which Fujiwara plans to throw her into an asylum once it is consummated, so he can hog Hideko’s assets, among which Sook-hee also demands a handsome paycheck. Things get complicated when Sook-hee is swooned by a doll-like Lady Hideko, whose delicacy and naivety, the aftermath of a reclusive lifestyle imposed by Kouzuki, is something she never expects to encounter and once her sexual awakening stands in the way of Fujiwara’s plan, there is no telling who will come off as the winner. Act I ends with a bang in your face, a twist segues into Act II, now we get the perspective from Lady Hideko.

Sheepish is not an apposite word to describe Hideko, she can be calculating and menacing (no one can indeed see the whole picture, that’s the lure of its narrative game: offer us a chance to leafing through those often imperceptible), flashback of her childhood, with her now defunct aunt (Moon So-ri in a transfixing cameo as the fruitcake) emblazons the perversity of Kouzuki and his reading club, where her aunt (later herself) are trained to narrate (sometimes even perform, with a wooden puppet for instance) erotic and often kinky stories from the antique books in front of an all-male audience, those who are solvent enough to participate in the auction of these said salacious urtexts, that’s where Fujiwara first lays his eyes on Lady Hideko.

Another grand revelation finally sets straight its multi-buried subterfuge, in the Act III, where Park Chan-wook’s unloosed endorsement of womanhood reaches its exuberant zenith, women are fêted by the abandon of sexual liberalization (under a vibrant pace) whereas men are doomed in their Freudian subservience (heightened by an overt self-referential appearance of a giant octopus, Park’s trademark metaphor of pervert and ruination).

Leading lady Kim Min-hee impeccably holds court here, conveying a tangy impression of Goddess finesse mingled with unpredictability, mystique, and empathy, her ageless countenance adorned by the gorgeous period costume and make-up, cogently embodies the most alluring quality of oriental feminism, paired with a ludic but emboldened Kim Tae-ri, their resultant eye-popping soft-core sex sequences dare to give BLUE IS THE WARMEST COLOR (2013) a run for its money. Ha Jung-woo, the superstar of South Korean cinema, dutifully deploys a broader touch to transmit a tinge of caricature and incredulity in a supporting job that elicits our sympathy even when on paper, his character shouldn’t.

Congenitally operatic, ravishingly sumptuous, THE HANDMAIDEN tops off a none-too-novel plotting and scheming pulp sustained with an absolutely captivating momentum which leaves its rapt audience feel triumphant and thoroughly justified, all by dint of Park’s upmarket artistry, aesthetic sensibility and gallant vision.