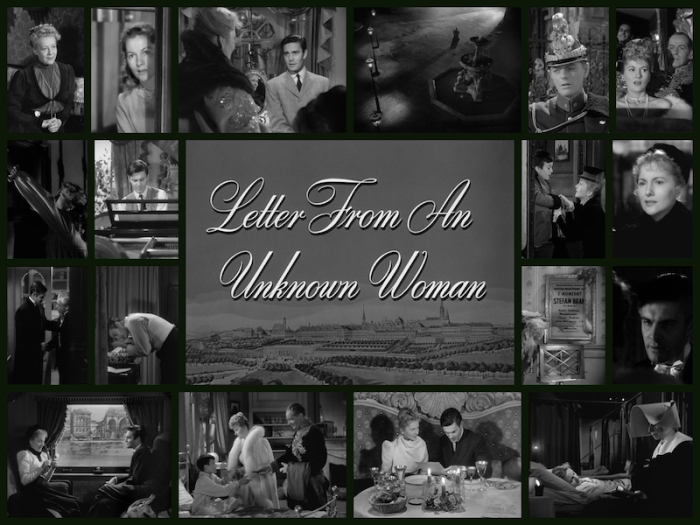 Based on Stefan Zweig’s novella, LETTER FROM AN UNKNOWN WOMAN is Max Ophüls’ magus opus which fails to get its fair recognition upon its initial launch, but time will attest its superlative craftsmanship and stunning aesthetics.

The story itself has its beggar belief elements in its nexus prima facie; how can a man not remember a woman who has thoroughly swept him off the feet, even just for a romantic and passionate one-night-stand? Maybe only real gadabouts can certify such occasion. But that is exactly where the story takes a leap of faith to accentuate the psychological disparity between man and woman, one is forever enticed by new possibility and ensconced in that living-for-the-moment benevolence while the other more often than not, caves in her chimera of reaching for the stars, when this occurs, thence tragedy ensues, maybe one should coin it as “fatal romanticism”.

Under Ophüls’ impeccable aesthetics, the film evinces great melancholy from its fin-de-siècle setting and punctilious guidelines, the swooning camerawork at hand swirls with its own propulsive vitality and takes no side-on glance at the periphery, homing in on its subjects, crystallizing every emotional pulsating to the fore of plenary niceties.

Joan Fontaine, scarcely credible to pass off as a teenager in the start (she was roughly 30 at that time), bides her time when her Lisa reaches adulthood, and buckles down henceforth, no matter what, she never loses her glamor and moderation, even in those pulverizing scenes of that twice-happened “two weeks curses”, she is Hollywood Golden Age’s screen goddess of profound implosion, an effort none-too elemental but totally falls in with Ophüls’ soft-centred temperament. Louis Jourdan, kicks off his inchoate Tinseltown career with a character considerably shows his chops (although he is a few years junior to Fontaine, he tosses off the daunting job of acting well-above his real age without visible hiccups), a continent fop, debonair, talented and charmingly ingenuous, naturally women fall for him, and his downfall is that he can never be wisely selective, too many interludes, but no symphony.

Music, plays a heavy part to accompany the narrative flashback, solemn, stentorian and plaintive, Daniele Amfitheatrof’s score cogently speaks volumes of our protagonists’ inward feelings, and once more we are convinced that Max Ophüls absolutely knows how to chisel out something intrinsically dramatic and transmute it into a magnificent and endearing heartstring tugger.