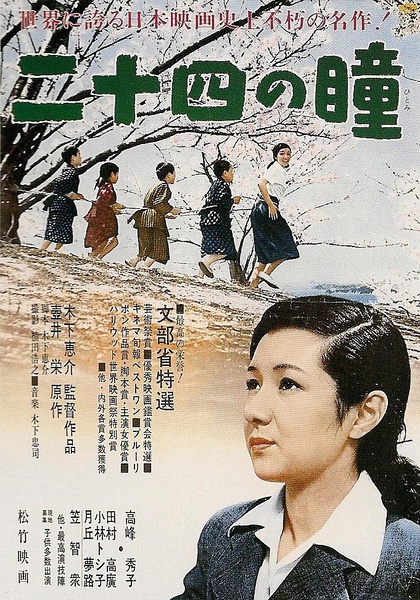 A lyrical reflection on WWII, Japanese director Keisuke Kinoshita’s magnum opus TWENTY-FOUR EYES is prominently, steeped in his humanistic take on the solemn state of affairs, entrusts a good-natured school teacher Hisako Oishi (Takamine) as the cynosure, and the title is a metonymy for the 12 first-grade pupils who grow up under her auspices through the turbulent years from 1928 to 1946 in a bucolic Shodo Island.

In 1928, Hisako is the new teacher of the village school and in charge of 12 first-graders (7 girls and 5 boys), she wears a suit (instead of a kimono) and commutes by a bicycle, regarded as too modern in others’ provincial eyes, but in fact it is nothing but being pragmatic. Radiating a cordial devotion to each of her pupils (a roll call sequence points up their strong bond which would sustain through the shifting sands of kismet), the young Hisako consolidates the mutual affections through folk songs and Kinoshita hammers home to viewers that those kids’ innocent visages can soften any impervious hearts, which will become his stock-in-trade in the subsequent jeremiad.

Incapacitated by a jejune prank, Hisako’s condition means she cannot ride a bicycle when one of her tendons is broken, so she accepts to be transferred to a nearby school for older students and promises that they will reunite in 6th grade, the touching farewell scene hits the mark of poignancy after a preceding snippet where the 12 tots play truant to visit Hisako in her home on foot. Then the time-line swiftly jumps to 5 years later, in 1933, a remarkable feat should be credited to the casting director, who has gathered the group of 12 six-graders possessing a stunning resemblance of their younger archetypes. Hisako gets married, while the teacher-student dyad becomes ever closer, extrinsic forces begin to assail the individuals: one girl must take on the duty of rearing up her new-born baby sister after her mother passed away, and a double whammy befalls when the said baby also dies, instead of returning her to the school, her father decides to send her away to work as a waitress in a restaurant; similarly another girl unwillingly withdraws from the class when it is her turn to assume the role as the family cook; for boys, that is another story, indoctrinated by the ultra-nationalism all the rage, they are hot to trot to volunteer as soldiers to Hisako’s utter dismay, who resolutely values human lives more than any ideological fanaticism, after the school principal reprimands her for her “coward” and dangerous thoughts, a disillusioned Hisako also parts company with her lofty vocation.

A fast forward to 1941, pupils grows up into adults, to whom Hisako stills holds very dear, and herself is a mother of three. The ongoing WWII conscripts all the militia, a harrowing tête-à-tête with a tuberculosis-inflicted former student tellingly conveys a pandemic hardship and dread hovering above each household. Personal tragedies will strike Hisako one after another, but those who survives must go on with their lives. Another five years go by, in 1946, after the damning war fizzles out, Hisako resumes her job and tearfully finds out among her new pupils there are offspring of her endearing first first-graders. A celebration organized by the remaining 14-eyes, including a pair of blind ones, brings them altogether, there will be tears, fond reminiscences, but also signifies a brighter future ahead, no doubt Kinoshita is a maestro of emotional manipulation but he has notch it up without betraying any trace of affectation, and the film’s ultimate confluence really packs a punch to our tear gland.

Also, sterling children performances are cogently elicited through Kinoshita’s orchestration, sometimes to a fault of immoderation (with a combo of watery eyes and plaintive dirges), but as a whole, it is a pretty amazing achievement; in the central stage, Hideko Takamine superbly sinks her teeth into a character laden with a gaping age range, and her personable charm and sincere timber thrust an irresistible impact to our likings. Typically shot at a remove with a ritualistic respect to its characters and milieu, and forfeits any idea of employing front-line bombardments to mess with our sensoria, TWENTY-FOUR EYES is a potent tearjerker illumining with a sagacious anti-war message, but also an ode to the unflagging strength inside an ordinary woman, the very rudimentary but foremost essence that makes us a decent human being.