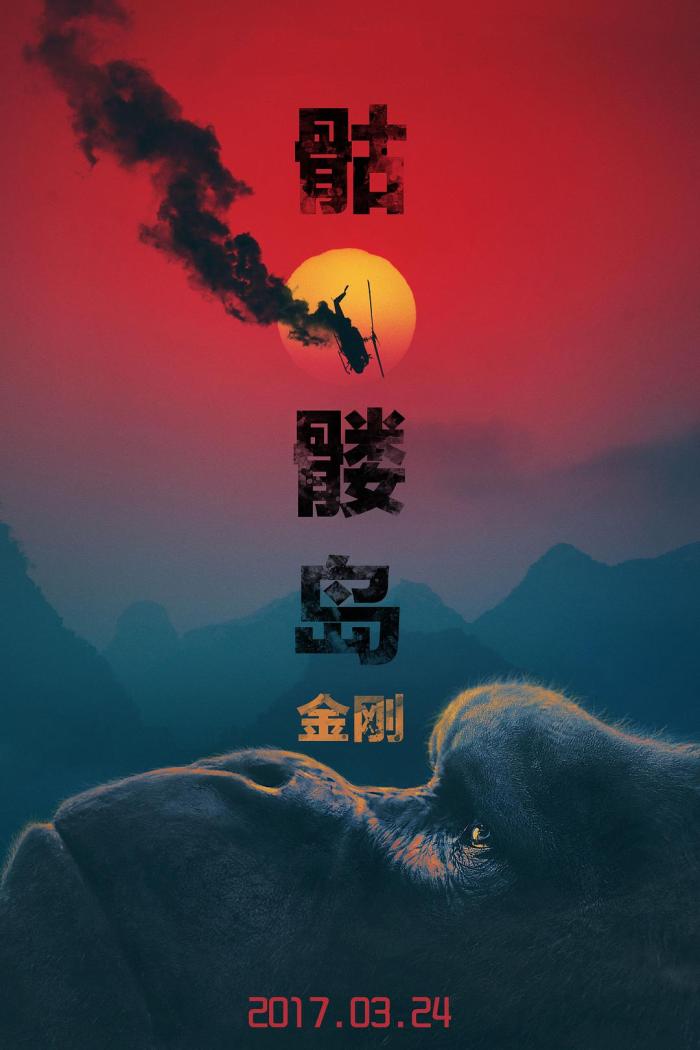 Second entry of Legendary’s MonsterVerse after GODZILLA (2014), a King Kong redux helmed by an untested Jordan Vogt-Roberts, his second feature. KONG: SKULL ISLAND correctly dots the i’s and cross the t’s of its genre’s jaded template instead of audaciously invigorating it.

An expedition of an uncharted island in the Vietnam war-era, the ensemble looks clunky in numbers, but soon their helicopter squadron will be crashed and burned by a colossal ape, that is the wage of the thinly-veiled militarism, without even landing their feet on the terra firma, the American army force lead by a war-crazed Lieutenant Colonel Preston Packard (Jackson) starts explosive-dropping on account of geographic survey, it is this type of human folly which effectively precipitates internal rift but also becomes increasingly vexing to its audience for its blasé content, which isn’t helped by typecasting Samuel L. Jackson in an egoistic role blustering and domineering to an excruciating quotient.

Dissimilar to GODZILLA, Kong, the gargantuan hominid ape, is emphatically introduced right in the movie’s prologue, which takes place nearly three decades earlier during the WWII, when an American lieutenant Hank Marlow (played by Brittain and 29-years-later by Reilly), stranded in the island with his rival, a Japanese pilot (Miyavi), among the indigenous Iwi people, who deems Kong as their godly guardian, because there are giant lizard-like predators coined as “skull-crawler” by Hank, lording over the place and Kong is a God-send messiah to subdue their menace. A missed chance to burrow into the mystique of the local tribes (is there any inter-human camaraderie there?), the whole partly man-made bedlam will be boiled down to (not unlike GODZILLA) a battle between two plus-size super-creatures (although biological echelon still prevails here, mammals soundly overpower reptiles), after human canon fodders are running out. On the plus side, it is an oriental and Hawaiian landscape porn to a wearisome eye, and its visual glamor is rendered with some very eye-catching chromatic ingenuity, namely, an ocher-imbuing grave-ground encounter with a deadly skull-crawler and the blazing nocturnal flair when Kong and Packard have their final confrontation.

Brie Larson stands out among the anonymous human cast as a gallant, no bull-shit heroine with a steely anti-war conviction and superb agility, but it is John C. Reilly who ekes out something mostly resembling an emotional crunch in his benign impersonation of a marooned man who determines to reunite with his family (with a son he has never seen) in this old chestnut, burdened with mediocrity and a soupçon of coruscating CGI-generated crafts.