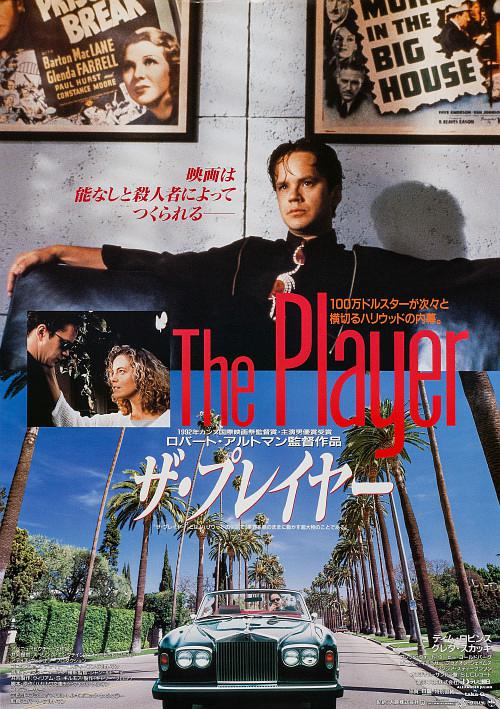 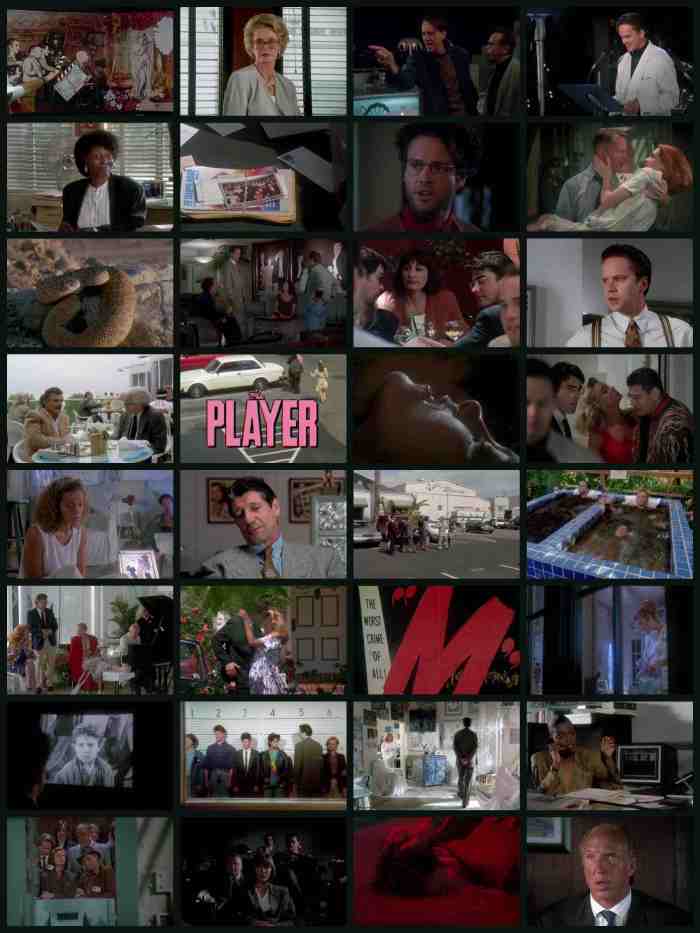 Robert Altman’s inside-Hollywood meta-comedy THE PLAYER is shot with a shoe-string budget but reverberates with sardonic, rapier-like kicks, and affixed with a chilling frisson that defies ethics and our expectation thanks to Michael Tolkin’s trenchant script which brings Tinseltown’s treacherous attributes to the forefront.

Altman’s much eulogized opening gambit, a nearly 8-minute long-take in the lot of a Hollywood studio, vocally pays tribute to Orson Welles’ counterpart in TOUCH OF EVIL (1958), is a coup de maître to be rewound and repeatedly viewed for its sheer coordination of the ensemble and the camera’s agility in motion. Taking the center stage is Griffin Hill (Robbins), a young producer whose job is to listen to screenwriter’s pitches of their ideas and to assess whether they are marketable enough to merit a go, and this producer-writer correlation is put under scrutiny as Griffin is dogged by anonymous, invective-scribed postcards, which he receives on a daily base, and after combing through telephone records, he gets the idea it is sent from David Kahane (D’Onofrio, bristling with ire and contempt), a bitter writer who might be rankled for receiving the short shrift. But gauging from Griffin’s quotidian workload and the ratio of pitches he must disregard (the studio has a yearly quota of 12 to green-light), we don’t get why Griffin is so sure it is David.

Trying to bury the hatchet by renewing his interest in David’s script set in Japan (Sofia Coppola’s LOST IN TRANSLATION arrives a decade later in 2003), Griffin seeks him out and “accidentally” kills him when verbal vitriol escalating into physical violence, here Altman shrewdly predates the occurrence with Griffin calling David’s home, and getting instantly bewitched by the latter’s girlfriend June Gudmundsdottir (Scacchi), an Icelandic painter, under a voyeuristic spell. So whether the subsequent accident is a homicide or manslaughter, the answer is quite out there.

The rest of story is against all odds, how Griffin gets away with the killing and lives happily ever after with June, does it sound like a joke? Yes, but the engagé Altman is in no fickle mood of maxing out Griffin’s quagmire before the anti-climatic reveal: his current post is in a perilous state of being superseded by the new blood Larry Levy (Gallagher), a diligent detective (Lovett) breathes down his neck closely and the relationship with his colleague-cum-girlfriend Bonnie (Stevenson) turns sour as he courts June with tenacious guilt stuck in his throat, in the end of the day, he gets what he wants not what he deserves, and the final turnabout of the fictive movie starring Julia Roberts and Bruce Willis is such a slap in the face of those who harbor an airy-fairy ideology of retaining a writer’s integrity in this rotten industry, only tempered by Altman’s tongue-in-cheek mordancy that tactfully keep both industry insiders and outsiders entertained but not miffed, not to mention its effervescent star-spotingg game of umpteen celebrity cameos.

Tom Robbins is the recipient of Cannes’ BEST ACTOR award but unjustly fails to nab an Oscar nomination (the film per se is a 3-times nominee including a well-earned BEST DIRECTOR bid for Altman), who takes us through quite a roller-coaster ride with his portrait of Griffin par excellent, smirky, craven, vulnerable, besotted and careworn, all these facets are contributory to such degree of ambiguity that viewers are inwardly battling against their own conscience in terms of his denouement. Greta Scacchi is given a sizable role to send up the ostensibly exotic, free-spirited type (she might not even hail from Iceland) who just cannot say no to an opportunity of comfort and wealth like anyone else, and whose inner state is tellingly belied in their torrid love-making/confession-denial sequences, a fine achievement. Among the peripheral players, no one stands out significantly in the fray, except for a wisecracking Whoopi Goldberg, who duly earns her stripes with tart and hilarious comedy chops.

In retrospect, THE PLAYER is a thrilling return-to-the-game comeback for Altman after his nadir in the 80s, and is among the most phenomenal works tackling the Hollywood hypocrisy and narrow-mindedness by lending an honest-to-goodness spin salted with tacit irony.