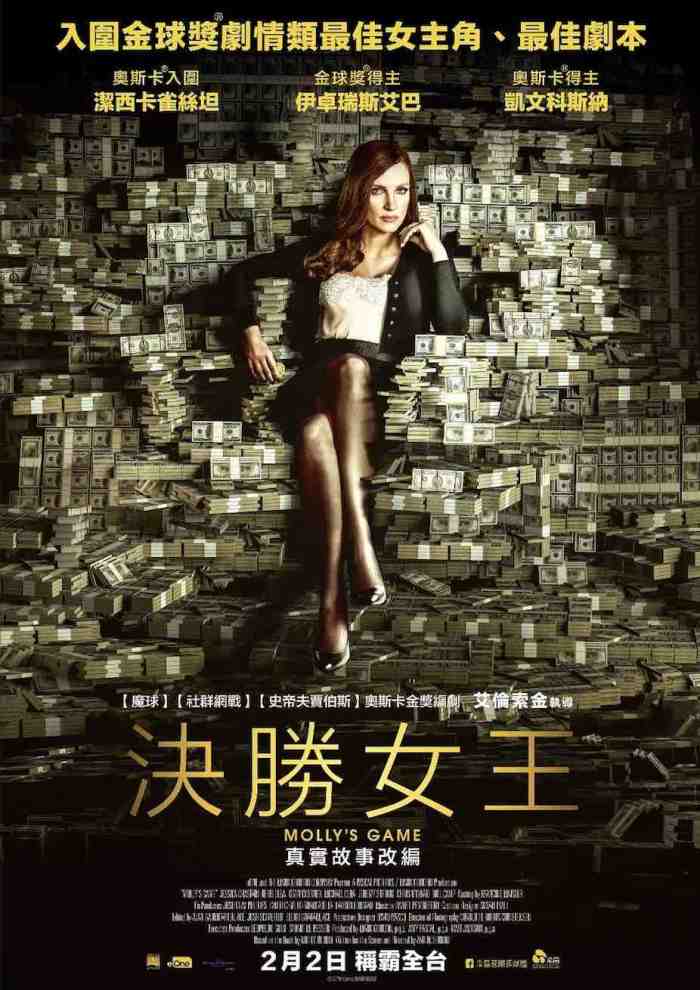 Aaron Sorkin’s debut feature film lives and dies with a barnstorming Jessica Chastain, MOLLY’S GAME, based on the newsworthy true story of Molly Bloom, an athlete manquée who makes her name by organizing underground poker games for high-rolling punters (celebrities, businessmen, rich second-generation youngsters and mafias alike), first in L.A., then in New York, but cannot shuck off its consequences.

A preamble of how Molly ended her mogul-skiing career is peppered with Sorkin’s trademark oratory in machine-gun velocity through Molly’s voice-over, tinged with mockery and pique. Years of harsh training from her magisterial father Larry Bloom (Costner, sustains a stern look all the time until a cathartic confession to reconnect the family tie) – her rancor-fested relationship with whom will get its dilatory payoff near the end, goes down the pan because of a slight oversight, this lesson hits Molly hard and actually actuates her with a high-risk taking, opportunist ambition to prove her (pecuniary) worth, that she is not a loser, yes, thanks to American’s putrid winner-takes-it-all motto.

Molly’s subsequent road to accure lucre is totally contingent on her own acumen and moxie once she chances upon a money-spinner, she seizes upon it and aspirant enough to be her own boss when time fits, she is remarkably clear-minded to leave sex off the table, especially if we consider how inextricably it correlates with the life she inhabits, Sorkin clinically excises any sex-related content from Molly’s rise-and-fall, and this conspicuity-by-its-own-absence is pregnant with many indications, not the least a lucid message to spurn the ubiquitous exploitation of gratuitous sex scenes in films, also it trenchantly points up the impersonal facade of Molly’s enterprise, she works like a machine, circumspectly avoids any personal contact with those dastardly, well-minted gamblers, and its burning-the-cande-at-both-ends requisite also takes its toll in exacerbating Molly’s drug addiction. Yet, at the end of the day, what she has seems so fragile and precarious if one of those arrivistes decides to leave her in the lurch just because he is offended by her ethical judgement or entangle her into legal actions when he is busted, although Molly is far with blameless in her own downfall, but to Sorkin’s lights, it is this misogynous, ruthless frame-of-mind that victimizes her as a cog in the machine of profit-seeking capitalism and repugnant gambling jones.

Chastain is indeed at the top of her game, albeit there are tints of kinship between the protagonists in this and MISS SLOANE (2016), both head-strong, opinionated women wrestles with a toxically patriarchal society that constantly diminishes women’s values, here the story is more self-oriented and self-sufficient in Molly’s own vivid experiences, Chastain continues to be a beacon in today’s female screen presentation and yoked to Sorkin’s prolix script, she is nonpareil, particularly in those less wordy moments where she manages to convey Molly’s own trepidation and perplexity to elicit our empathy albeit the unsavory nature of the life she chooses to lead.

Less rewarding is the two-hander between Molly and her lawyer Charlie Jaffey (Elba), where the latter feels strangely miscast with his towering stature going at odds with his apparently strained (albeit solicitous enough on the spot), short-breathed elocution, their chemistry never gives occasion to a legitimate boiling point, of which this overwrought convo-fest is much in need, by and large, MOLLY’S GAME is too avaricious in indulging its maker’s ideology to its own good, however sagacious his intention is.