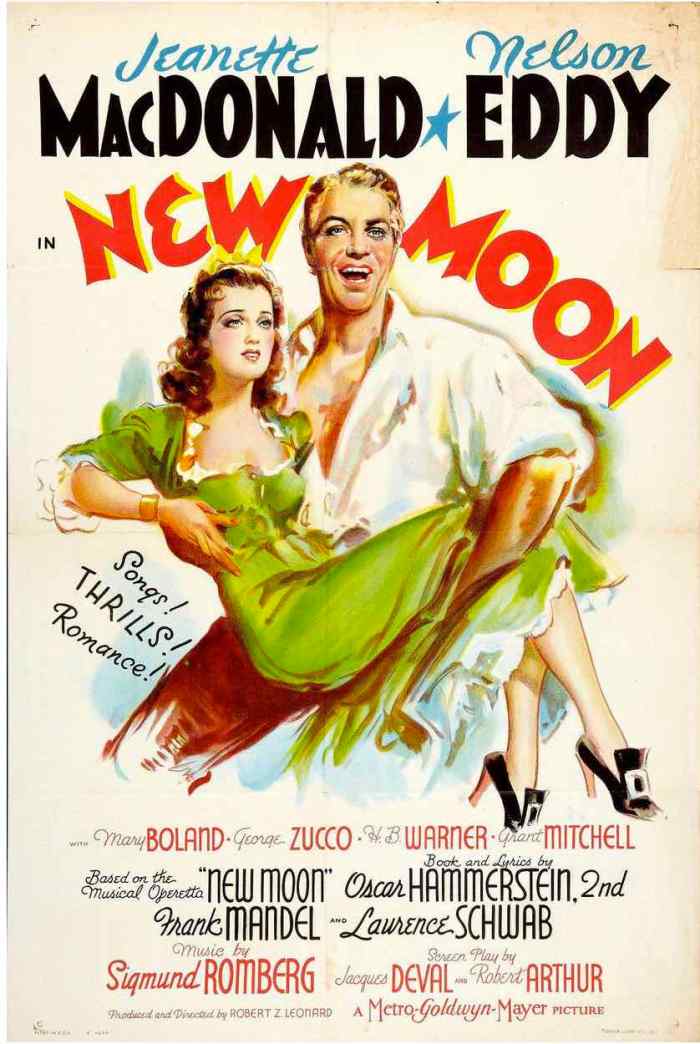 The 6th out of a total number of 8 pictures headlining songbirds Jeanette MacDonald and Nelson Eddy, they are cranked out either by Robert Z. Leonard or W.S. Van Dyke, and NEW MOON is credited to the former, who replaced the latter in the eleventh hour.

Amid the hubbub of the upcoming French revolution near the end of 18th century, nobleman Charles Henri (Eddy), wanted in France, assumes the identity of a bondsman on a packet boat en route to New Orleans, where he charms the aristocratic Mademoiselle Marianne de Beaumanoir (MacDonald), who is chaperoned by snooty auntie (a shrill Mary Boland), but when on terra firma, Marianne is piqued to find out Charles is merely a bond servant bought to under her employment, an incipient romantic tingle quietly transmutes into a proto-Pride-and-Prejudice sparring that occupies the first act with fair levity and a turgid overtone where opposite attraction incubates.

The second act takes shape when Charles’ true identity is divulged, and Marianne has to let him go for his own safety’s sake, although she has become smitten by him, step by step, still, the percolating canard of Charles’ discreditable repute bedevils her. The resultant revolt is a slapdash mess even by the 40s Hollywood yardstick, actions are wishy-washy while marching song is quaintly (if appositely) antediluvian, and by the quirk of fate (or indeed, artistic license), they end up on the same ship, the titular “New Moon”, whereas Marianne is the passenger, Charles leads a bunch of fellow rebels hijacking the ship, ludicrously pulls off one of the most cursory maritime make-believe mutinies ever being conceived.

After a shipwreck near an anonymous island miraculously leaves no casualty whatsoever, the third act veers into a utopian microcosm of a society build ex nihilo by the precept of parity and goodwill (of course, ample nubile maidens are conveniently deployed on board beforehand), and this time it is Charles’ turn to call the shots, although Marianne has no grudges of contributing her labor like a plebeian, her doubt about Charles’ character takes a little bit more time to be dissipated as we are all well prepared to what kind of an ending the cockamamie story leads to.

A lofty, fluffy stodge mostly hindered by a dated aesthetic guidance and a workmanlike execution, on a lesser level, a less telegenic performer in the form of Nelson Eddy, whereas Jeanette MacDonald at least leaves an animated affectation (not to mention her well-poised curls), he is sheer ponderous to regard with his wooden line delivery, there goes the nonexistent chemistry we are supposedly to root for. Thankfully, we have the two star’s baritone/soprano voice to appreciate, but if you are looking for a good time with some substance, sensibly give NEW MOON (1940) a wide berth.