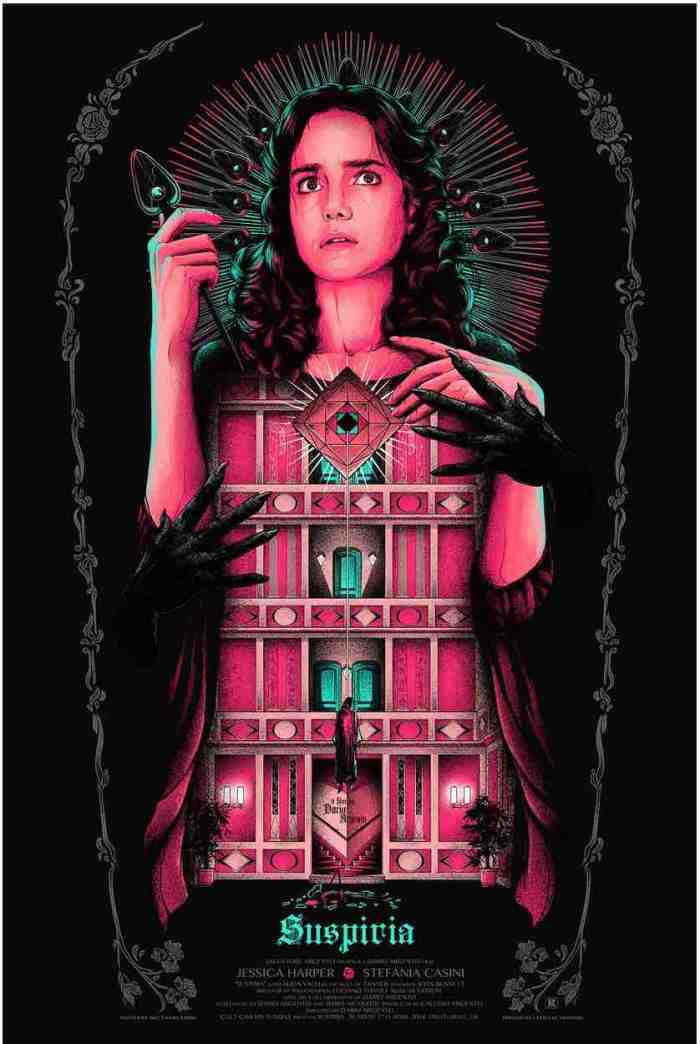 Dario Argento’s SUSPIRIA is a seminal Giallo slasher, pits the doe-eyed final girl Suzy Bannion (Harper) against a coven of witches ensconced in the Tanz Dance Academy in Freiburg, treads lightly on witchcraft 101, but wallows in Argento’s baroque aesthetics to the excesses just for the hell of it.

The opening gambit is a terrifically grisly murder of dancer Pat Hingle (Axén), who has known too much and needs to be silenced, and what a spooky but also glorious death, all we are allowed to see of the perpetrator is an inhumanly hirsute arm, stabbing a bared heart against gleaming fluorescence inside a futurist building, Argento revels in the gory minutiae and grandly sets the keynote of the film.

The ensuring plot pairs Suzy – after an unaccountable hemorrhage incident, she is most of time drugged into oblivion by her strictly doctor-designated meal – with Sara (Casini), Pat’s best friend, as the newly bonded friends, exchange their suspicion in makeshift beds one night when their rooms are infested by larvae, or in the eerie swimming pool, before Sara inevitably falls to the next victim in another Grand Guignol machination ended in a wanly-lit room laden with groaning barbed wires, preceded by a Gothic dog attack on the academy’s blind pianist Daniel (Bucci), who threatens “he is blind, but not deaf” when being fired by the stern matron Miss Tanner (Valli), yes, he also knows too much for his own good.

Apparently, Argento applies a rather pat pretext to explain the motive behind the coven, to Suzy, she is just another nosey-parker, but a lucky one when she grasps the nettle to slash the invisible Helena Marko (aka. Mater Suspirirorum) out of desperation, ergo, when the ringleader is dispatched, here also goes all her subordinates, a simple solution to a well-trodden template. Granted, it is neither the story itself nor transfixing performances (that said, Joan Bennett gives a collected, less rigid matriarchal presence as Ms. Blanc in her final screen persona and Jessica Harper emanates a fragility that is too perfect for the character) that graces Argento’s work its reputation, what marvels us is Argento’s garish scenography, from its expressionist decor, primary-color heavy palette to the ubiquitously expressive lighting, his SUSPIRIA is a force of profligate caprices embodied by an overblown visual and aural style (prog-rock band Goblin’s incidental music is a sledgehammer mood enhancer), engraved to his own splatterpunk proclivity that can magnetize an undying horde of cult following.

Whereas dancing serves a token function in Argento’s movie, in Luca Guadagnino’s reconstruction and reinterpretation, it plays a prominent role in connecting Suzy (Johnson, professionally groomed for the role with terpsichorean training) with Madame Blanc (Swinton), between whom an underlined mentor-protégée bond is established, the dancing pageantry has a grandstanding in the company’s modern dance “Volk” performance (serpentine writhing in red tassels à la black box theater) and pervades in the climatic witch’s sabbath gore (a corybantic event).

Comprising six acts and an epilogue set in divided Berlin, Guadagnino’s SUSPIRIA runs about an hour longer (153 minutes) than its original, and wisely countervails the latter’s brash chromatic onrush with a muted, wintry hue that is more align with its context, which also flags up another important upgrade, the story is politicized by its historical German Autumn background, in the first act, the disappearance of Patricia (Moretz), is nominally linked to her involvement with the radicals, and later the coven’s divided loyalty, it is mother Helena Marko’s versus Madame Blanc, all too easily evokes Germany’s milieu at then.

Even more so, Guadagnino swims with the current tide in its piquant feminist slant (the provenance of witchery itself could be dated back to oppression and demonization of unruly women by a patriarchal hierarchy), Suzy is empowered with her own Mennonite backstory, and her dying mother’s last words hints that she is anything but an ingénue. Peer pressure is also missing both among dancers and academy matrons, in a critical gambit, scribe David Kajganich elongates the story by inserting a subplot about Dr. Josef Klemperer, a senior psychotherapist of Patricia, who becomes embroiled in the coven’s intrigue as an extrinsic force that has its own woe of tale to overcome (actuated by a cameo from Harper). Most astonishingly, the hoary Josef is actually played by an unrecognizable Swinton with disguise, a stunt that makes the entire cast almost exclusively comprises of females, and Swinton’s Zelig-like versatility is an inexhaustible gold mine.

On the scary quotient, Guadagnino’s SUSPIRIA is shy of jump scare and atmospheric creepiness, however, it excels in decomposition makeup and contorted grotesquerie, and extends a startling body horror sequence that lasts far longer than one might expect, frantically and synchronously edited in parallel with Suzy’s dancing movement, an uncomfortable yet pulsating AMSR experience. However, when barreling on the home stretch with the host body ritual finally eventuates, the materialization of mother Helena Marko (again, incredibly played by Swinton) is a stomach-churning bête noire and the whole business revolving around a demon-invoking Mother Suspiriorum soon veers into a ruddy charnel house which fails to register enough frisson the film seems to promise.

Be that as it may, one oughtn’t to cavil much about a visionary director who tries to fabricate something diametrically distinctive from its canonized predecessor, he might err on the side of ambition and consistency, but the revamped version has an insuperable edge over Argento’s, after all, who can deny the divine pleasure of a sonic journey from a susurrous Thom Yorke?