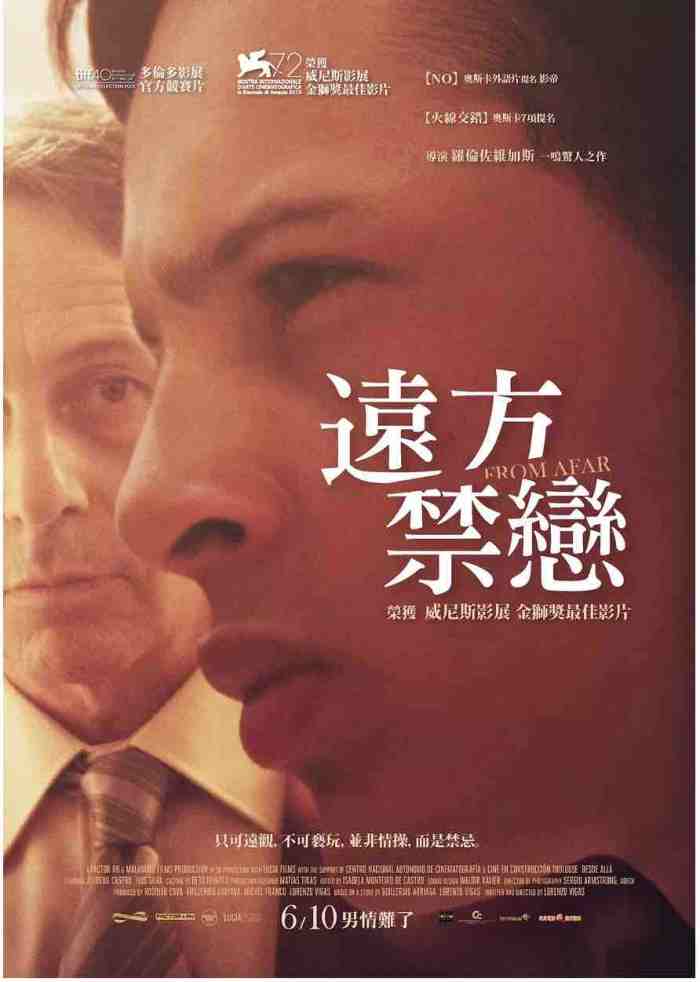 But Armando has an unorthodox proclivity, physical contract is strictly off limits, he is perfectly satisfied by a distanced wank, echoing the title “from afar” (even no need of visual genital aids from a youthful body), as if he is both aroused and repulsed by a young man’s body, which underlines his own troubled past, it is a transaction solely thrived on monetary terms. But Élder appears different from his usual biddable commodities, he is more recalcitrant, incandescent and restive, which challenges and intrigues Armando to take a different approach aiming to tame this beast, ergo, go-arounds of earning one-upmanship pan out in Vigas’ self-contained narrative with staggering restraint and unrelieved elisions, for instance, the missing father is an obvious vacuum in both men’s lives, but Vigas has no intention to expound what happened between Armando and his estranged father (sexual abuse?), without even a medium shot of the latter, what we see is only the action of Armando dogs him relentlessly, and coolly articulates that he wishes him dead.

Eventually, it is Élder’s bruised dignity, inherent impressionability and have-nots status altogether that puts him on the back foot, after Armando’s munificent gesture of rescuing him from bovver, paying off his debts and contest of superior manliness, Élder avails himself of physical capital (the only thing he possesses) to show his gratitude, but is rebuff with a slap in the face. At that point the balance tips towards Armando, he now has Élder completely at his beck and call, who finally find a father figure to fill that missing hole, yet to Armando, Élder is nothing but a perfect executioner of his long-gestated vengeance.

After that, Armando vouchsafes Élder the physical satisfaction the latter hankers for as a thank you, then throws him as a spent sidearm to the mercy of police force in the gritty finale (like father, like son, Élder ends up exactly like his own father), which even triggers viewers to second-guess the verity of the man we assume as Armando’s father, a telltale shot of both men in an elevator shows no apparent recognition from a father to his son might suggest the older man could be a target Armando is assigned to rub out, a theory supported by him being the same killer from Pablo Larraín’s TONY MANERO, also played by Alfredo Castro with a peculiar gusto of perversity, and this time, he cunningly finds him a perfect whipping boy.

Castro gives an unforgiving, enigmatic impression as a victim-turned-victimizer out of a vicious cycle passing from fathers to sons, who is capable of projecting a soul-searching gaze that is smolderingly pregnant with manifold rays of emotions. Youngster Luis Silva, on the contrary, invests a throbbing directness that salts the masculine tug-of-war with his own macho swagger, perplex and conflict, vividly. Habitually playing up with his in focus/out of focus perspective, Vigas makes a big splash with FROM AFAR by intelligently excoriating the core of a cankerous male mentality concerning what constitutes the masculinity as we know it today, a scope well above his genderqueer front and accomplished with a refined difference.