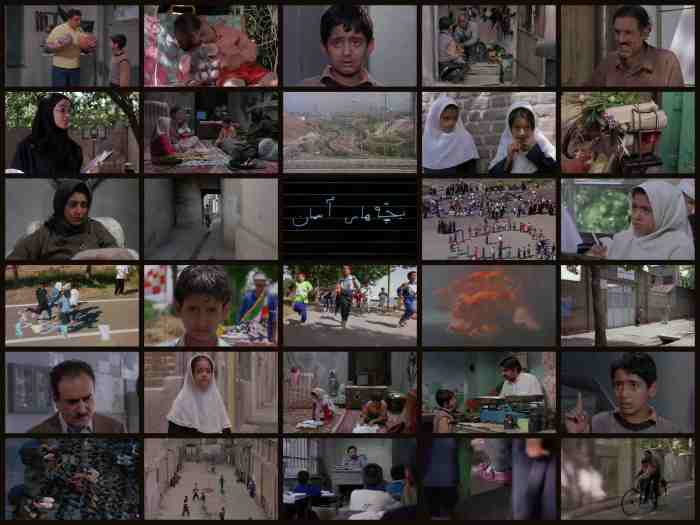 Sensibly eschewing Jafar Panahi’s irrepressible militancy, and self-consciously differentiating from Abbas Kiarostami’s fathomless philosophy, their compatriot Majid Majidi represents another strand of Iranian cinema, a more approachable, intimate study of day-to-day life that often centers on those from the on the wrong side of the tracks, and CHILDREN OF HEAVEN, his third feature, is an emblematic piece of work that reflects his less confrontational, more compassionate frame of mind.

Its bare-bones plot commences when a grade schooler Ali (Hashemian) loses the only pair of shoes of his younger sister Zahra (Seddiqi), due to their family’s indigence, they dare not mention it to their parents (Naji and Sarabandi), so the stopgap is that they share Ali’s only pair of time-worn sneakers, a plot device conveniently arranges for different curricula for the pupils, Zahra wears the sneakers to school in the morning, then exchanges them with Ali so that he can attend his afternoon class, an arrangement impels that the sibling must dash to shorten the time interval. Still Ali fails to be prompt for his class, three days in a roll, only narrowly escapes of calling his parent to school; meantime, Zahra accidentally finds out her missing shoes appear on the feet of her fellow student Roya (Jafar-Mohammadi), but when the sibling gets a glimpse of the condition of Roya’s family, compassion foils their attempt to ask them back, and later Roya earns Zahra’s friendship with her own probity.

Taking the viewpoint exclusively from the two school kids, Majidi makes a persuasive argument in stressing the absent attention and ingrained paternalism from those adults around them, one can forgive the negligence of their mother, who is somewhat indisposed and has another infant baby to tend to. Yet the others: their father who obviously notices Ali and Zahra exchanging notes on the sly; the churlish grocer who is spoiling for chasing Ali away from his vegetable crates; and Ali’s school principal who harshly berates him for being late, but they make no effort to (even tentatively) plumb the causation of the kids’ erratic behavior, thus makes for Majidi’s most aggressive critique in the movie.

Elsewhere, Majidi leaves things on a benevolent sphere, the only time when Tehran’s rich and poor (classified and divided by their horizontal loci) converges, it is a big relief and an even bigger financial reward to Ali’s tongue-tied father, who afterwards, holds forth about his envisaged new means of improving their impoverished life, only to take a spill on the downward slope, Majidi tacitly insinuates, things will not be that easy, invisible hurdles are at every nook and cranny.

Finally, the climax is a down-to-the-wire running race in which Ali participates (since he has been practically training on a daily basis) and hopes to finish at the third place, as its reward includes a pair of sneakers, only the competition is so fierce, after many a slo-mo shot showing Ali running for all his is worth, our reluctant champion is lachrymose in his victorious photo-shoot, but unbeknown to him, a happy ending is comfortingly hinted but not visualized, thanks to Majidi’s acuity, the film ends with a well-sustained calmness and beatitude, that precludes the story from rushing into a saccharine coda.

Albeit Majidi’s inclination of indiscriminately sugar-coating his poverty-ridden characters, CHILDREN OF HEAVEN can get its pardon for skillfully and believably eliciting a strong emotional empathy from its prelapsarian protagonists, both Hashemian and Seddiqi are cute-looking, precocious performers, the film simply hits the mark of any compassionate adult’s soft spot, even it is essentially a pluperfect kid’s movie.