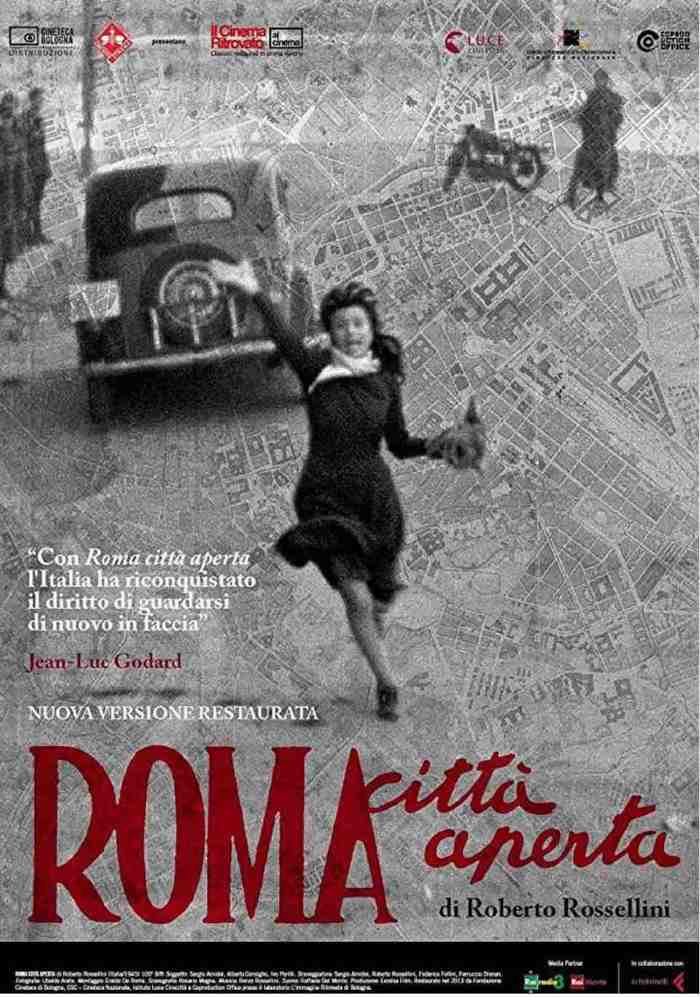 In Roberto Rossellini’s neorealism pièce-de-résistance ROME, OPEN CITY, melodrama and cinéma-vérité are magically blended together to elicit oceanic amazement and pathos, it is a panegyric of ordinary Italian citizens’ bravery and heroism under Nazi occupation, and in an exceptional note, religious belief doesn’t stand in the way.

The most devastating moment (underscored by Renzo Rossellini swelling accompaniment) in the first half comes when a devout Catholic widow Pina (Magnani), is offhand shot dead on her wedding day when she runs after the truck that carts away her soon-to-be-husband, the Communist partisan Francesco (Grandjacquet), here, a matrimony uniting two different persuasions is squarely squashed in the open, wartime savagery lays waste to any opposition indiscriminately, and the magnificent Anna Magnani leaves a defining moment in the world cinema with Pina’s final gesture of attaining the unattainable, the shock stemming from the sudden dispatching of Pina’s vivid, even ebullient spirit is tenacious to be dissipated.

In the second half, it is another pair comes to the fore, the Catholic priest Don Pietro Pellegrini (Fabrizi) and the Communist engineer Giorgio Manfredi (Pagliero), a leader of the Resistance group and Francesco’s comrade, who is hunted by Nazi party and on the lam right from the start, also varied in their fundamental beliefs, their camaraderie gels naturally due to the same noble cause, when the crunch comes, Don Pietro is forced to witness Giorgio being tortured to death, who refuses to divulge any information no matter how, Rossellini shows his ballsy grit to peer into Nazi’s heinous brutality with unflinching gaze, and Fabrizi phenomenally internalizes Don Pietro’s pulverized emotion with both dignity and poignancy, which, then he parlays into a resigned determination when he faces his own execution.

Frankly, the story has a typical structure of an ensemble drama, with Don Pietro stands out as a nominal leading figure, apart from Magnani’s cracking presence, Pagliero shows off a steely facade that befits Giorgio’s heroic designation, and Maria Michi, as Giorgio’s treacherous mistress Marina Mari, also impresses with her perceptible oscillation between a self-serving fink and a soft-headed victim herself, not to mention the sheer sapphic entanglement between her and Ingrid (Galletti), the German officer that corrupts her with a mink coat, another bold move bearing out Rossellini’s integrity as a boundary-pushing artist. Finally, Harry Feist, who plays the chief antagonist Major Bergmann, sporting a mechanical Italian accent with a distinctive emphasis on every single syllable and exaggerating his unabashed swagger and hubris (that Master race and Slave race remark is abominably grating), comes off as a curate’s egg, one-note maybe, but also superbly watchable nonetheless.

While Rossellini surveys meticulously for exterior locations that maintain high fidelity of Rome’s immediate state under the occupation, he also makes good with available if limited means to establish striking indoor settings, in particular the tripartite space of Bergmann’s office where the interrogation takes place, one end of the office room is connected to the spare, hellish torture chamber, and another to a saloon proffered with booze and tuneage where German officers revel in their dooming fantasy and superiority, by transiting from one place to another, Rossellini hits the bull’s eye of making his point, ROME, OPEN CITY is unapologetically dichotomous in its moral stance, and aesthetically, arresting from A to Z.