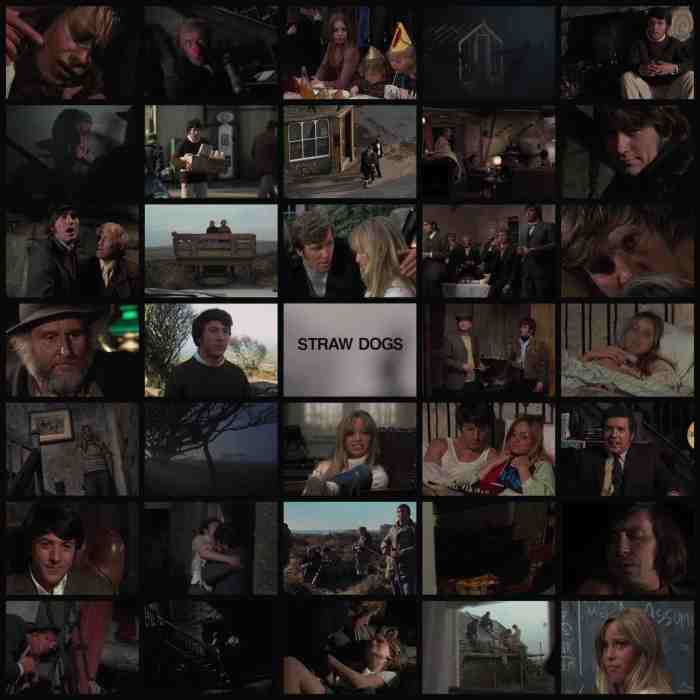 Fidelity has never been entering Sam Peckinpah’s head in adapting Gordon Williams’ novel THE SIEGE OF TRENCHER’S FARM, the truth is, apart from the climatic siege part, Peckinpah deep-sixes almost everything else, with co-scribe David Zelag Goodman, he fabricate a typical a-worm-will-turn thriller with culminates in a gratifying half-hour-long home invasion finale where poetic justice prevails, right on time.

STRAW DOGS also puts its name on the map of stern contention – not a salutary one though, refuted by feminists, or rather, any ordinary person harboring a conventional conscience, by projecting an unsavory tincture of its maker’s own problematic rape fantasy onto the character Amy (George), the young nubile British wife of American applied mathematician David Sumner (Hoffman), the couple who has recently relocated to the Cornish village where Amy hails from.

Right from the off, David is intimidated and taunted by a gang of local yobs led by Chris Venner (Henney), an old flame of Amy, whose carnal lust is rekindled, and he is not the only libidinous one there. Soon the couple’s nuptial bliss takes a downturn, when Amy’s Lolita charm gives way to immaturity and neediness, and David further retreats into his study, gazing at the black board and mulling over celestial matters, leaving the maintenance work in the untrustworthy hands of Chris and co. After their cat is murdered and hung in their bedroom closet, Amy becomes exceedingly disappointed by David’s inaction, and chides him for being a coward, that is a false accusation.

Unbeknown to David, during a hunting sortie alfresco, Chris secretively goes back to their manse and forces himself on Amy, then cowed at the gunpoint by his buddy Norman Scutt (Hutchison), he reluctantly assists a second rape when a helpless Amy suffers in pain and wail. The sticking point is Peckinpah’s portrayal of the first rape, to a certain degree, he makes the victim Amy seem to be enjoying the ravishing considering her past with the enforcer and her frustration toward her husband, a blatantly regressive school-of-thought stemmed from many heterosexual male’s mindset, but under no circumstances, can be brooked today. What’s more, amped up by another female character Janice (Thomsett), the jailbait who cannot keep her provocative advances (a misdemeanor also laid into Amy) from the mentally challenged local young man Henry Niles (Warner), which in time, precipitates the whole siege at the expense of her own youthful life, Peckinpah’s misogynous penchant cannot be dispelled.

That said, an able reviewer must take a critical and more disinterested eye here, Peckinpah might show scant respect to women, but in this picture, he also vigorously nails the detrimental aspect of what we define as modern masculinity and tactically keeps a lid on Amy’s mishap from David until a cardinal moment during the climax. David is a truly fish out of water in this jerkwater, close-knitted village, where he and his bullies are separated by profound cultural disparity, what extrinsically happens to the nerdy David unavoidably evolves into a face-off between modern civilization and primeval violence, when the transition from Gemeinschaft to Gesellschaft is still in the twilight zone, and more vehemently, Peckinpah hams home that sick abandonment in violence, even a man as civilized as David begins to revel in the resultant gore and adrenaline rush by rubbing out a (despicable) human being, an almost male-exclusive physiology and mentality.

Visually, a shout-out must be accorded to the breathless and stupendous editing (effected by three editors), the crosscutting between a duck-hunting David ambling in the wilderness and Amy subjected at the receiving end of a fate worse than death, is pulsating with a mind-bending rhythm that is so cinematically attention-absorbing, so is the final frantic lone-hero-against-a-mob-of-five smackdown, that blistering catharsis cannot be carried off with such flying colors in any lesser hands, you know that antiquated mantrap will draw blood in one way or another. Plus, Peckinpah is probably not a dour sadist as he impresses prima facie, the skirling strains have quite a feel of gallows humor, and John Coquillon’s Oscar-nominated score perfectly breathes along the rollercoaster ride.

Underpinned by two sterling leading performances – Hoffman is predictably eloquent in illustrating David’s pent-up emotion state which will be topped off by his stunning transmogrification; a 20 year-old George, for all the brackish treatment of her character, proves to be a valiant thespian who is equipped to knuckle down in the murky waters to elicit haunting frisson -, Peckinpah’s STRAW DOGS is irrefutably a curate’s egg, but if we can soberly separate art work from its artist, which is a notion this reviewer will drink the Kool-Aid for, it reflects something rather universally authentic, immanent and if resoundingly toxic, a must-see for all menfolks, not exactly to embolden oneself to be a blood-letting hero if such an unfortunate crunch might strike, but, in a more therapeutic fashion, to introspect the seminal question, what makes of a man?