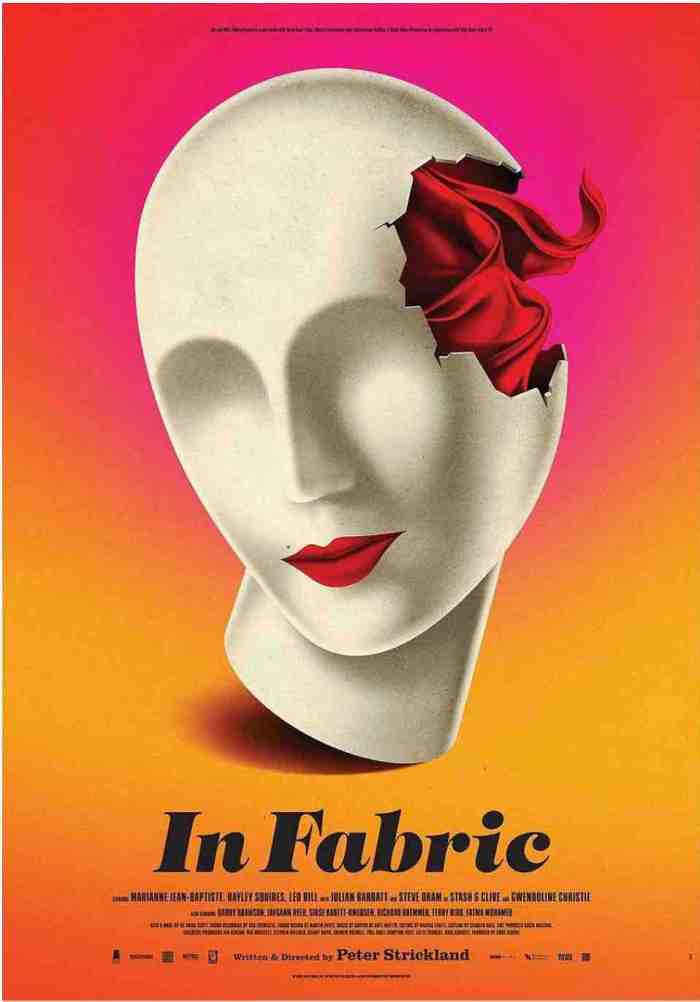 An object horror from UK filmmaker Peter Strickland, his fourth feature, IN FABRIC is all about a life-claiming red dress. Set in an unspecified time, probably the 70s or 80s, it is a two-fold tale.

As a forthcoming blind date awaits for the lonely heart, recently divorced bank teller Sheila Woodchapel (Jean-Baptiste, the poor man’s Viola Davis finally pays her dues in a starring role) is cajoled into buying a new dress in the Dentley and Soper department store by the highfalutin and exotic saleswoman Miss Luckmoore (Mohamed). While the satin, diaphanous texture, and vibrant color is quite becoming on her, soon it is crystal clear that the dress possesses some occult power: it deep-sixes the washing machine while being washed, seems to be telekinetically controlled by one of the store’s saleswoman, and has the psychic capacity of asphyxiating its shrouded prey, moreover, it can not be destroyed or even returned (it never occurs to Sheila that she might try to junk it somewhere), ergo, there is only one way Sheila can part with it, for good.

After that, the dress falls into the hands and the body of Reg Speaks (Bill, an exemplary of soft touch), a washing machine repairman who is jeered into donning it during his stag-do, and later gives it to his fiancée Babs (a feisty Squires), similar fallout irrevocably occurs, but also Strickland makes a hell of a commotion in the department store, with its conflagration and mythic inferno-alluding upshot.

After the one-two punch of BERBERIAN SOUND STUDIO (2012) and the divine lesbian sexual transgression drama THE DUKE OF BURGUNDY (2014), the conceit of giallo has been thoroughly infused into Strickland’s artistic veins, IN FABRIC robustly boosts its psychedelic interior settings tailored with Strickland’s trademark attention and competent deployment of auditory eeriness (synth sound and amplified score, etc.), which sometimes transcends its staggering visual accompaniment (mirror refraction sequences generate strange chronophotographic montage, for instance) to induce an effect of trancelike incantation, not so dissimilar from Reg’s monotonous, but rather amusing trance-inducing verbalization of his professional vernacular, which reflects Strickland’s further immersion into the incomprehensible and metaphysics, clearly, saleswomen like Miss Luckmoore are life-animated mannequins, kit out with superb posturing, vintage coiffure/wig and florid utterance, even heightened by a bleeding vagina to shock their assumed creator Mr. Lundy (Bremmer).

But overall, its consumerism-bashing message feels obtuse, the wantonness of liquidation is unvalidated – not to mention putting a sexed-up Gwendoline Christie’s Gwen, the mean girlfriend of Sheila’s son Vince (Ayeh), out of harm’s way is somehow problematic, especially in juxtaposition with what blood-shedding business a kind-hearted Sheila has to suffer repeatedly, and the kookiness of Stash and Clive’s (Barratt and Oram, playing Sheila’s bosses in the bank) pettifogging mannerism fails to pack a punch. Confounding but timelessly chic in its expression, IN FABRIC aims at haute-couture horror, but comes off as a bit dress-down in its final manufacturing.